Ain’t no mountain high enough as Knight Frank raises over £21,000 for charity 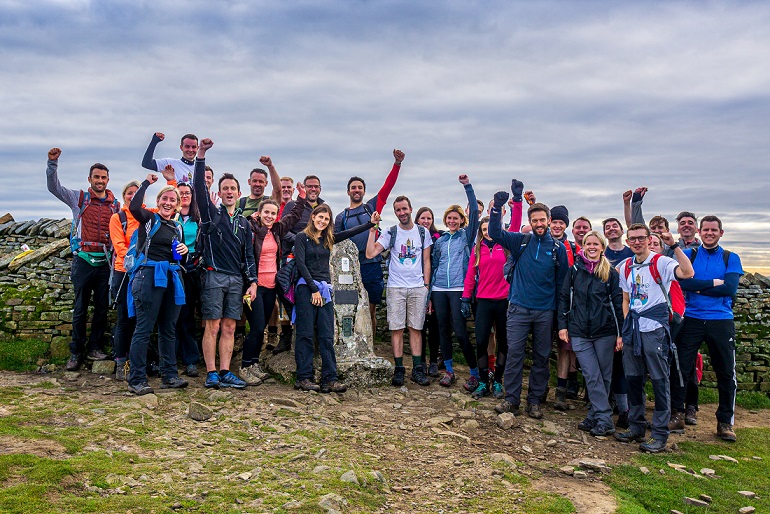 The teams, from Knight Frank’s nine offices across the UK, walked 3,000 miles and climbed 600,000 ft over the course of one day. That is the equivalent of 22 ascents of Everest from sea level (62 from base camp) or walking the entire distance from the UK to New York.

Amy Wood, from the Leeds office, said: “Too many charity fundraisers are about a handful of alpha athletes doing what they love doing, which is fine. Whilst yes, we scaled mountains and really stretched ourselves, the focus this time was about inclusivity and teamwork.

“The logistics of getting almost 100 people from our northern offices around the Dales with limited daylight and potential for bad weather was a real challenge. But it was worth it. The real beauty of the day was seeing people achieve their goals.”

Corrine Travis, one of the main organisers, explained: “What we have learned is that people got more from helping colleagues than their own personal achievements. We therefore had three simultaneous challenges of between one and three peaks all coming together for a mass finish at Ribblehead.

“This approach meant that absolutely everyone got involved in a very vivid demonstration of what we can achieve as a team.”

“It was an incredibly hard day with a very early start. At times I really didn’t think I was going to be able to complete the Challenge, but my colleague Tom Goode was there with me every step of the way. This is an achievement I will cherish forever….without Tom’s kindness and patience I would never have made it. I simply can’t thank him enough.”

Wendy Kinghorn from the Leeds office added: ”Before the Walk, Peter Whiteley was just the name of someone from our Sheffield office who I had never met. I was struggling on the day but Peter never once left my side. It took us a little longer but the sense of achievement and the cheer at the end was beyond words. A name and a colleague just became a friend.”

Almost £6,400 has been raised for Create a Dream Foundation (CADF), the Sheffield-based children’s charity, by city solicitors Wake Smith. Set up in 2017, the...
Read more
Out of office

“Keeping the sparkle going” is the theme of a new campaign which aims to encourage local people to start exploring Bradford’s hospitality, retail and...
Read more
Out of office

After nearly five months of closure due to the coronavirus lockdown, The National Coal Mining Museum in Wakefield has re-opened. Work behind the scenes has...
Read more
Out of office

Business and management students at Leeds Beckett University are offering their expertise to local businesses of all sizes through a series of free short-term...
Read more