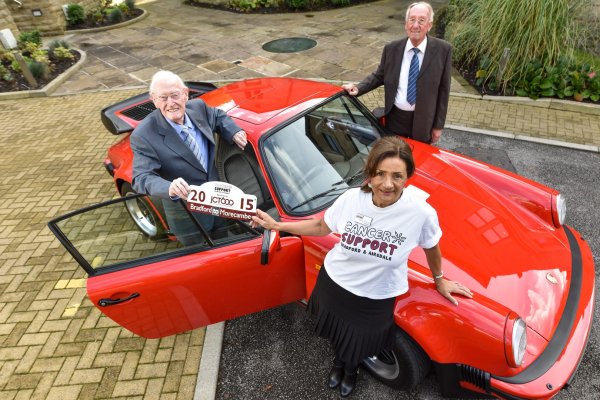 Yorkshire car retailer JCT600 has continued its sponsorship of the annual Bradford to Morecambe Historic Vehicle Run which has again raised nearly £2,000 for Cancer Support Bradford and Airedale.

Now in its 27th year, the vehicle rally was once again organised by founder, Gerry Watson, and saw more than 100 classic cars of all types and ages embarking on the 130 mile round trip from Bradford to Morecambe.

Starting as a humble cycle race in the 1950s, the event has now developed into a one day nostalgic extravaganza for classic car enthusiasts, attracting thousands of visitors to the seaside town. Gerry’s 1936 Talbot Ten Tourer was among the oldest vehicles taking part this year, alongside a 1932 Vauxhall Cadet Cabriolet. Also present were four Jowett vehicles from the late 1940s to early 1950s which were built in Idle, Bradford.

Every year, members of the local Porsche Club of Great Britain take part, showing a range of classic cars which this year included a red 1987 911 3.2 Carrera Supersport, the oldest Porsche at the event and one of only 22 known to the Porsche Club GB, and owned by Geoff Benson.

Event founder and organiser Gerry Watson comments: “We once again had a fantastic turnout of some beautiful vintage cars. The grand display on Morecambe promenade was magnificent and it was great to see so many people coming along to enjoy the spectacle and reminisce about the vehicles they remembered from years gone by. Our thanks to JCT600 for continuing to sponsor the event and for everyone who supported it.”

The historic vehicle run was supported by JCT600 for the 15th consecutive year, with all proceeds once again being donated to Cancer Support Bradford and Airedale. The independent charity supports people with financial, practical and emotional issues caused by a cancer diagnosis and is the only service of its kind in the district. JCT600 chairman Jack Tordoff has been a patron for over eight years.

Linda Enderby, fundraiser, adds: “We are extremely grateful for the donations we receive from this event. Cancer Support gives face-to-face personalised support to thousands of people every year. Our services are free but that’s only possible because people like Jack and Gerry continue to support us.”

Based in Bradford, JCT600 is a family business with a history of over 60 years. It has dealerships throughout Yorkshire, Derbyshire, Lincolnshire and the North East and sells 18 of the world’s most respected brands such as Aston Martin, Audi, Bentley, BMW/MINI, Ferrari, Maserati, Mercedes-Benz, Porsche, Vauxhall and Volkswagen. The group employs a workforce of 2,000 people.