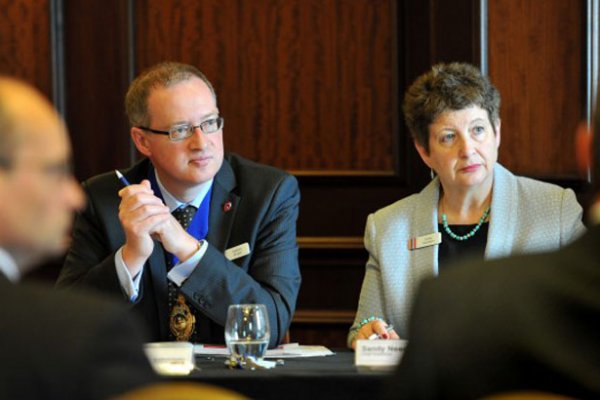 Stephen Wright of Thorite, Past President of Bradford Chamber, takes over as Chairman and Andrew Lindsay of Lupton Fawcett, who led the Chamber during its merger, stands down.

Graham Cooper of Agfa Graphics, and a key figure in establishing the Universal Technical College (UTC) in Leeds which opens next September, has been appointed as Vice-Chairman of the Board. Also joining the Board is York & North Yorkshire Chamber’s new Chamber President Ed Everard of Saville Audio Visual. His deputy and Vice President is now Bridget Davies of Minster FM. New Board members also include Paula Dillon of Bond Dickinson and Nick Garthwaite of Christeyns who take on vice-presidency roles in Leeds and Bradford respectively.

The AGM also premiered the Chamber’s new animation film outlining achievement in the last 12 months, which can be viewed here. Key landmarks included: a value of goods declared on international documents at £22.5billion, attendance of over 7,000 delegates to Chamber events, 405 individuals helped to start a new business, 3,600 businesses supported through Chamber services (such as the legal helpline), 80 businesses housed in Chamber property and £5.6 million loaned to business by the Business Enterprise Fund. This comes in addition to 4,000 young people helped to engage with business in the year.

Chief Executive of West & North Yorkshire Chamber, Sandy Needham says: “It’s important that the board represents a diverse range of member businesses across the region to help determine the direction of the Chamber group. Our mission continues to be to support, connect and represent our members.  I’m looking forward to working with the new board to establish a growth strategy for the Chamber.”

In the picture are Chairman Stephen Wright and Sandy Needham.

Yorkshire based In-site Property Solutions has created a new company to invest in projects and organisations that have solutions for societal and environmental problems. The...
Read more
Commercial Property

In its latest business support update, Streets Chartered Accountants highlight the need to be ready to do business with the EU from January 2021,...
Read more
General News

A Sheffield marketing expert is returning to his roots, as he launches what he describes as a reinvention of the marketing function for the...
Read more

Yorkshire based In-site Property Solutions has created a new company to invest in projects and organisations that have solutions for societal and environmental problems. The...
Read more
Commercial Property