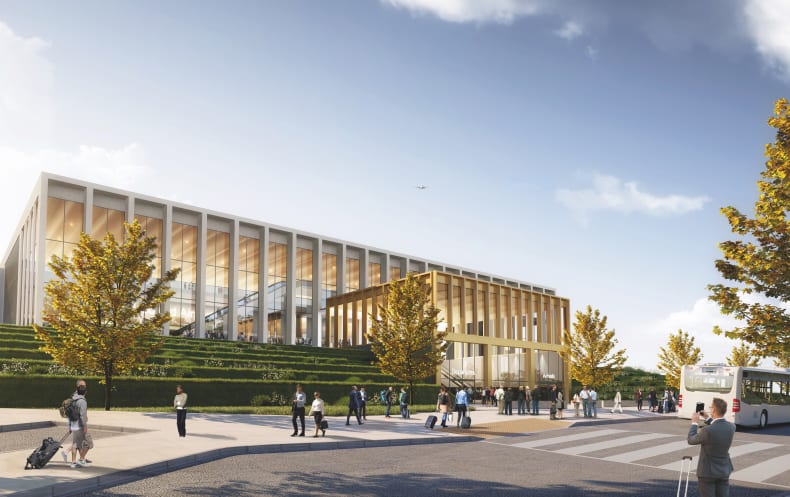 Controversial expansion plans for Leeds Bradford Airport (LBA) have been approved despite objections.

The £150m scheme proposes a new three floor, 34,000 sq m terminal to replace the outdated and inefficient existing terminal and an increase in flights.

Environmental concerns were raised in regards to the development, for its potential impact on climate change. The BBC has highlighted warnings from climate scientists who say that with the expansion, the airport’s greenhouse gas emissions would be more than those allowed for all of Leeds in 10 years’ time.

Those in support of the development meanwhile have highlighted the economic benefits.

It is anticipated that the terminal couple be completed in 2023. LBA estimates that as a result of the development, it will support 12,650 permanent jobs across the Leeds City Region, as well as create 850 construction related jobs over the period of the build.

On the decision to grant the scheme conditional approval, a Leeds City Council spokesperson said: “The council recognises that the Leeds Bradford Airport planning application has been the subject of much public debate and, from the moment it was first submitted, full and proper attention has been paid to the evidence and arguments put forward by supporters and opponents alike. It should also be noted that the application was assessed on its own individual merits as part of the council’s normal planning process.

“There were a large number of matters for plans panel members to consider during this process, including the council’s declaration of a climate emergency and the issue of increasing carbon emissions from flights.

“Current Government policy points to these emissions being something that should be primarily tackled at a national level – and addressed through international agreements and protocols – rather than by suppressing growth at individual airports in a way that could simply export passengers to other nearby airports at a higher financial cost to them and increase surface transport emissions.

“The city plans panel also took into account matters such as the impact of aircraft noise on residents and the airport’s proposals for noise mitigation and landscaping as well as planned accessibility improvements designed to encourage a greater proportion of passengers and staff to use public transport for their journeys to and from the site.

“In addition, the airport’s plans showed that the proposed new terminal would replace the outdated and inefficient existing terminal and be built to a higher standard of environmental performance that would also provide an improved ‘gateway’ to Leeds, with an associated creation of new jobs.

“The application has been approved by the city plans panel today taking into consideration all of these issues, subject to a change and tightening up of certain conditions being discussed and agreed with the applicant, a section 106 agreement and referral to the Secretary of State for Housing, Communities and Local Government. The council is keen to continue working closely with local residents, businesses, community associations and the airport as the development begins to take shape.”

Objecting the scheme the Group for Action on Leeds Bradford Airport (GALBA) released a statement saying: “GALBA is disappointed that Leeds City Council has chosen to provisionally approve the expansion of Leeds Bradford Airport. This is the wrong decision: wrong in law, wrong in planning policy and wrong for our climate! Today, Leeds City Council has put itself on the wrong side of history.

“However, our campaign is far from over. The decision is legally flawed and if the Council persist and grant full permission on the basis they discussed, then it will be open to legal challenge. We’re in a climate emergency and we simply cannot afford to carry on as if there’s no problem with increasing greenhouse gas emissions.

“We are grateful to those councillors who showed leadership by voting to protect our climate and our local communities. GALBA would also like to thank the thousands of people who support the campaign and say to them: stick with us – this story is far from finished.

“About the conditional decision: even with the conditions set by the Council, this gives the green light for a huge increase in greenhouse gases, noise and air pollution. Expansion would make it impossible for our city to become net zero and would make a mockery of the Council’s Climate Emergency Declaration.

“It renders that declaration meaningless because when it has come to action, the Council has been shown wanting. They are in denial. This was an opportunity for Leeds City Council to show leadership and accept responsibility for protecting our world. They seem to have failed. In doing so, they have lost credibility when it comes to tackling the gravest danger that we face – the climate crisis.”

A statement from West & North Yorkshire Chamber of Commerce meanwhile in support of the scheme says: “There is untapped potential at LBA and it is time to embrace its redevelopment, and particularly its plans to create a highly sustainable and net zero carbon facility. Infrastructure projects of this scale and investment with private backing do not come along every day and these developments drive economic growth.

“I understand the environmental concerns some will raise about aviation but simply continuing with the existing infrastructure is not the answer, nor is exporting our carbon footprint to airports elsewhere as our region’s travellers have to fly from Manchester or other locations. The proposed investment will create the most efficient and sustainable airport terminal in the UK, setting new standards.

“This investment will pave the way for a sustainable future in aviation that LBA couldn’t otherwise deliver. This development provides investment in cleaner fuels. enabling the airport’s entire fleet of support vehicles to switch to hydrogen and EV through the inclusion of a new energy hub. It will provide direct access to the proposed new rail station, in turn offering passengers and employees more sustainable travel choices.

“More broadly the aviation sector is facing up to the challenges of climate change with national and international leaders already working to decarbonise the sector. Proposals for LBA will facilitate its transition to a more sustainable model, with airlines already committing to flying ultra-efficient and quiet planes, which the development will continue to attract.

“A value of £869 million to our region, protecting 12,650 livelihoods, and creating new opportunities simply cannot be underestimated even in normal times. But it’s more important than ever to our region and its future.

“Leeds is well placed to be one of the country’s leading business destinations, but we need this type of infrastructure to support that ambition. The Chamber, and the many businesses we represent, want and need this investment for the jobs and economic benefits it will undoubtedly deliver to our city and region.

“I am certain that LBA’s vision will deliver an airport that is better placed to support our region’s long-term economic recovery and growth whilst providing an airport that Yorkshire can be proud of. This is a once in a generation opportunity to deliver key infrastructure, and we cannot afford to waste this moment.”

Morrisons and McColl’s are extending their wholesale supply partnership in a move which will see 300 of the latter’s convenience stores converted to the...
Read more
Finance

Plans to extend and improve a York care home have been approved, in what is the next phase of the city council’s work with...
Read more
Out of office

A new maritime experience at Hull’s historic North End Shipyard is set to become one of the most energy efficient buildings in the UK’s...
Read more

Morrisons and McColl’s are extending their wholesale supply partnership in a move which will see 300 of the latter’s convenience stores converted to the...
Read more
Finance