The founder of a Rotherham based academy that offers a variety of dance classes – from ballet to street dance to Zumba and Pilates – to people of all ages has won the coveted Young Entrepreneur award in recognition of her achievements over the past year.

Jessica Long, a 19-year-old from Parkgate, received the grand prize at the 2015 Rotherham Young Entrepreneur of the Year awards after her business – JL Dance Academy – was also named Best New Start Up.

Now in its tenth year the event, results were announced at the Local Employment Advisory Forum (LEAF), and hosted by Rotherham Youth Enterprise and UK Steel Enterprise, a subsidiary of Tata Steel which supports the economic regeneration of communities affected by changes in the steel industry, recognises the achievements of business owners under the age of 30; with the winners announced at a ceremony which took place yesterday at Rotherham’s Magna.

It makes up part of the region’s celebrations of Global Entrepreneurship Week which is the world’s largest campaign to inspire entrepreneurs through local, national and global activities.

Last year’s winner was Sam Goddard of Response Vehicle Lighting, who has since built on the progress that earned him the title of Rotherham Young Entrepreneur of the Year 2014 by moving into new, more spacious premises and take on his first employee.

Speaking after the awards ceremony Jessica said: “I’m really pleased to receive the awards which is a real boost for the academy; particularly as we reach the two year mark.

“It has been a whole team effort to grow the business. Not only the teachers but the students too, so it will be a double celebration at Christmas!” 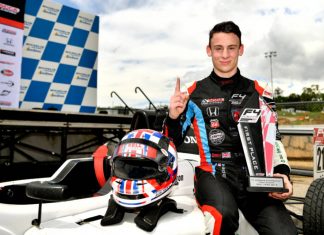 Dominic Cuthbert - 17th January 2020
A talented up-and-coming race car driver is looking to partner with local businesses as he continues to rise in the world of motor racing. Teddy...