The eight companies headquartered in Yorkshire (compared to five last year) include seven new entrants to the league table. Their sales have grown by an average of 73% a year over three years to a total of £137.1m, and together they employ 1,981 people.

The region’s top-ranked company is sports equipment supplier Bluefin Trading. Based in Hebden Bridge, it exports to Germany, France and Australia, and grew sales to an annualised £6.7m in 2018 by an average of 122% a year over three years.

Other new entrants include trampoline park operator Gravity Active Entertainment. Based in Castleford, West Yorkshire, and operating exclusively in shopping centres, it provides trampolines, indoor climbing, golf, and virtual reality games. It has raised £8m in funding from Guinness Asset Management since 2017, and has grown its sales by 56% a year, hitting £9.8m in 2018.

The Fast Track 100 is sponsored by Virgin Atlantic, Barclays, BDO, BGF and N+1 Singer, and is compiled by Fast Track, the Oxford-based research and networking events firm.

Sir Richard Branson, founder of Virgin Atlantic and Virgin Group, which has supported Fast Track 100 for all 23 years, said: “While these are uncertain times, there is one thing I am certain of: entrepreneurs are the ones driving innovation, chasing improvements and challenging the norm. There are so many inspiring examples of this on the Fast Track 100 league table and it’s heartening to see the power of entrepreneurship to create jobs and positive change across Britain.” 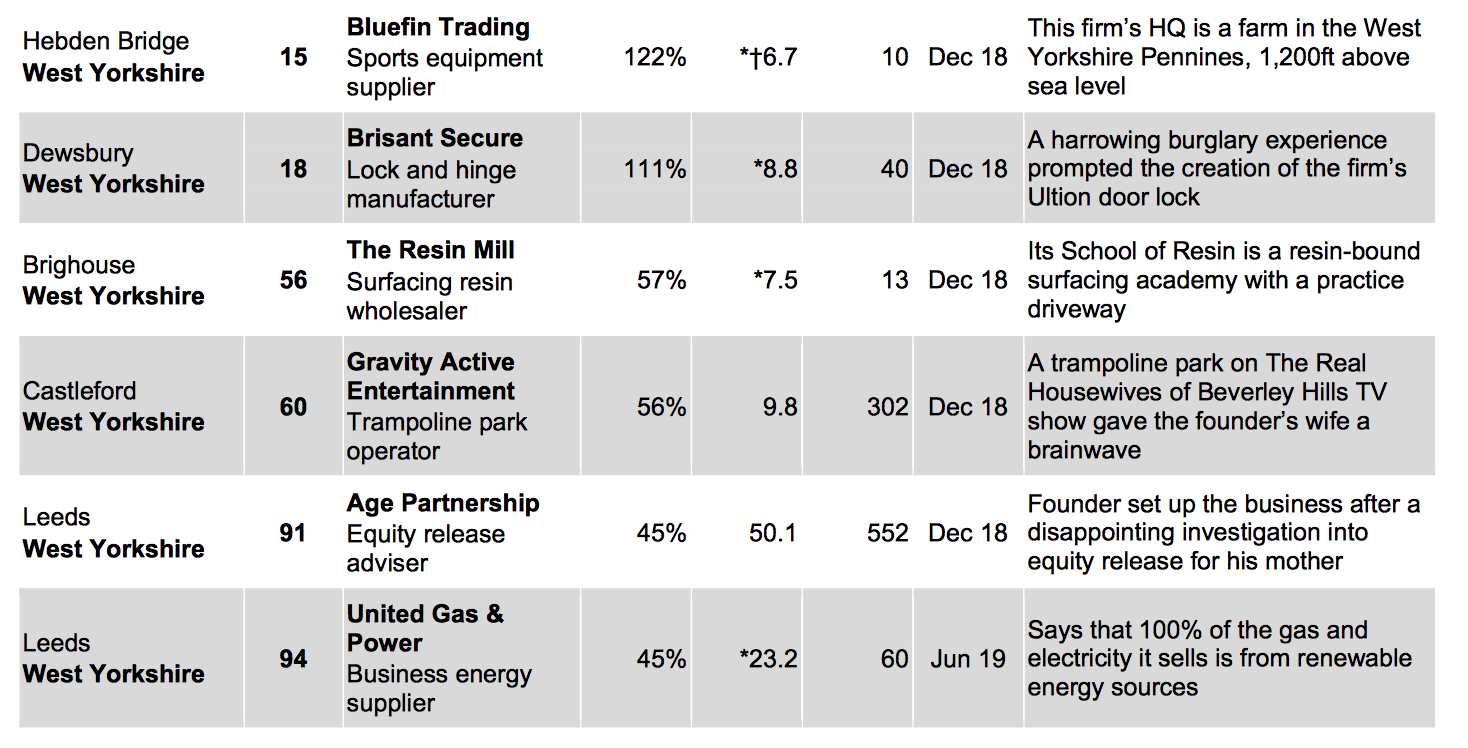 This year’s Fast Track 100 achieved, on average, sales growth of 78% a year over three years to a total of £3bn. Together they employ 16,818 staff, having more than tripled their combined workforce over the period.

Regions: The region with the most company HQs is London (30), followed by the southeast (19). The second most dominant region is the north of England – 22 companies are based there, with 11 each located in the northwest and the northeast. There are nine companies based in the Midlands, eight in Scotland, four each in the southwest and Wales, three in the East of England and one in Northern Ireland.

The full league table is published on 1 December as a 10-page supplement with the business section of The Sunday Times both in print and in the digital edition, and on www.fasttrack.co.uk