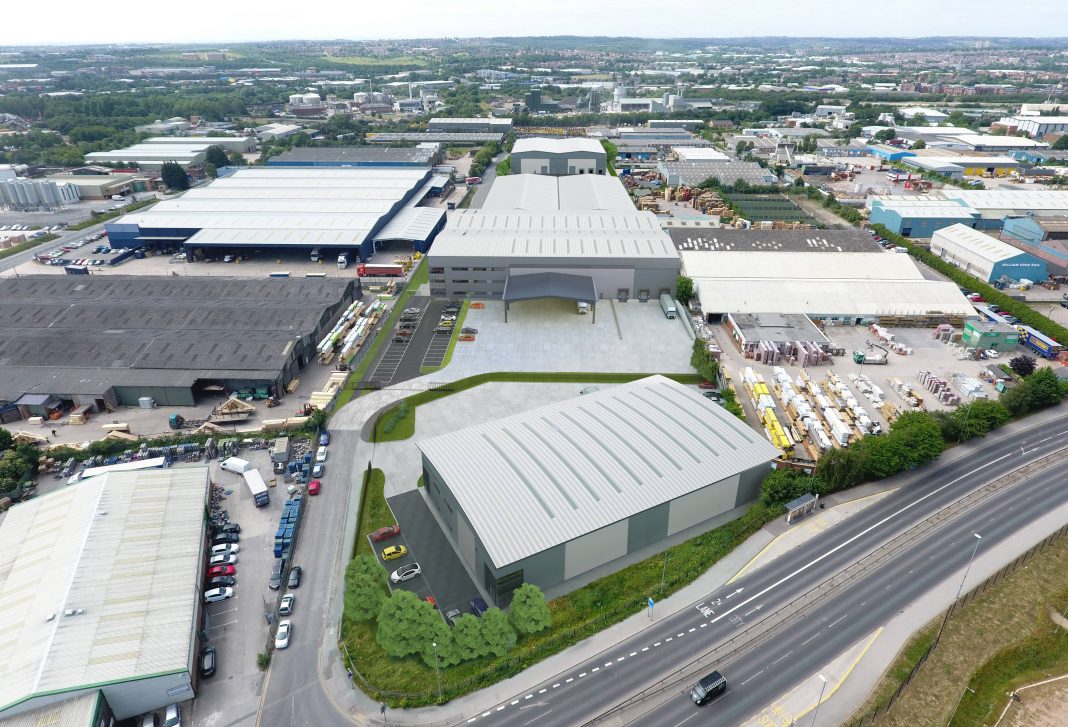 The last unit at Towngate Link, a brand new £1.7million industrial and warehouse property, which forms part of the overall development that totals 194,000 sq ft, has been pre-let for a record-breaking headline rent.

Located at Cross Green Industrial Estate in Leeds, the final unit at Towngate Link has been pre-let to the Co-op Group for 20 years by property consultancy, Gent Visick. Measuring 17,500 sq ft, it is the final deal to be done at what has become Towngate plc’s most successful industrial development in its 59-year history, having pre-let all four buildings.

The first phase of Towngate Link included two speculative buildings which were both pre-let. The first 63,000 sq ft unit was let for 10 years to Wetherby based Beerhawk, a supplier of craft beers. The second 55,500 sq ft unit was let to London City Bond, a national distributor of wines and spirits to retailers and wholesalers, for a 20-year period.

“All of the construction work was completed in September 2020 by Leeds based Caddick Construction on time and on budget, despite the challenges faced by the pandemic. There is no doubt that the build-quality of the project, alongside all the advice and guidance from the agents and design team, have all contributed to its success.”

Phase two included the speculative construction of a 57,400 sq ft unit, which was pre-let on a 10-year basis to Van-Line Ltd, a well-established Leeds based company that sells automotive components and parts, as well as safety equipment, in December 2019.

The final piece of the jigsaw was the speculative construction of the fourth building providing 17,500 sq ft, which has now been pre-let to the Co-op.

Director, Paul Mack, from Gent Visick, who brokered the deal with the Co-op Group, said: “The Towngate Link development represents one of the highest quality projects, and most successful speculative programmes in the region. To have pre-let all four buildings to four successful businesses, is an outstanding result, and to hit a record rental level on the final building was the icing on the cake.

“We are honoured to have played our part in this hugely successful scheme and it has been a privilege to work as part of a team on behalf of Towngate plc.”

Gent Visick and Knight Frank advised on the development, which has been constructed for Towngate plc by Caddick Construction. Towngate Link was project managed by David Stanway of David Stanway & Associates and legal advice was provided by Schofield Sweeney. PNG Property Consultants represented the Co-op.

The West Yorkshire Combined Authority has launched a public engagement into plans to build a new rail station on the existing Harrogate line, between...
Read more
Commercial Property

Heald, the Hornsea-based manufacturer of hostile vehicle mitigation systems, has strengthened its position across Asia after signing a new partnership agreement with Singapore’s ESCO. The...
Read more
Finance

British Business Investments (BBI), a commercial subsidiary of Sheffield’s British Business Bank, has completed a commitment of €40 million to the first close of...
Read more
Appointments

Finance Yorkshire has appointed two new board directors and two new members to its Investment Advisory Panel (IAP), which monitors the performance of its...
Read more
Commercial Property

The West Yorkshire Combined Authority has launched a public engagement into plans to build a new rail station on the existing Harrogate line, between...
Read more

The West Yorkshire Combined Authority has launched a public engagement into plans to build a new rail station on the existing Harrogate line, between...
Read more
Commercial Property

Heald, the Hornsea-based manufacturer of hostile vehicle mitigation systems, has strengthened its position across Asia after signing a new partnership agreement with Singapore’s ESCO. The...
Read more
Finance

British Business Investments (BBI), a commercial subsidiary of Sheffield’s British Business Bank, has completed a commitment of €40 million to the first close of...
Read more