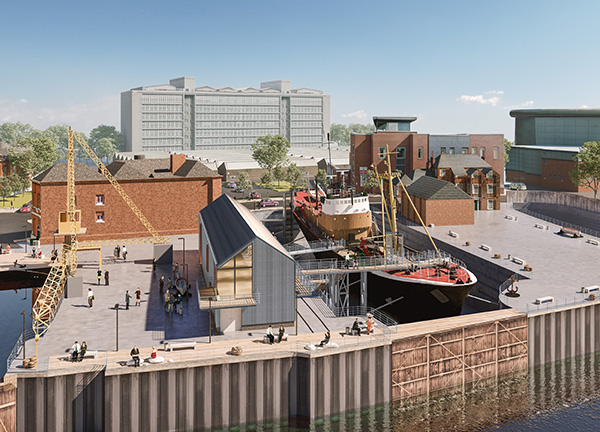 Focus Consultants has been appointed to a key role on a scheme that aims to boost Hull’s rich maritime heritage.

The firm has been awarded the role of NEC contract administrator on the major development, which has just been awarded £13.6m from The National Lottery Heritage Fund.

Following the success of the UK City of Culture, Hull is using the momentum to transform its heritage and become a world-class visitor destination.

The £27.4m heritage-led regeneration scheme affects the entire city, creating a new sense of place, identity and belonging, and will include exciting changes at the Grade II* Hull Maritime Museum, the Dock Office Chambers, the North End Shipyard and two historic vessels, the Arctic Corsair and Spurn Lightship.

Hull City Council is putting forward £10m of match funding, along with a further £4.3m for the redevelopment of Queens Gardens, once the world’s largest dock, which will connect the three key sites involved in the development.

Nottingham-based Focus has been appointed on the scheme by Purcell, the conservation architects and heritage consultants for the project.

Associate at Focus Consultants, Mike Lee, said: “This is a super project which will preserve and promote Hull’s amazing maritime history, building on the success that the city achieved two years ago when it was UK City of Culture. It’s great news that it has recently been awarded £13.6m from The National Lottery Heritage Fund for the delivery phase of the project, and Focus Consultants – with huge experience in both heritage and regeneration schemes – is looking forward to having a role in the plans.”

Ros Kerslake, Chief Executive of The National Lottery Heritage Fund, said: “As UK City of Culture, Hull proved just how remarkable its heritage and people are. Thanks to National Lottery players, this project will build on that incredible legacy and sense of pride, saving Hull’s maritime heritage and ensuring the communities and places which were shaped by it are at the heart of securing its future.

“It’s the National Lottery’s 25th Birthday this year and in that quarter of a century, more than £7.9bn has been raised for the UK’s heritage. What’s happening in Hull shows just how impactful National Lottery investment can be.”

Focus Consultants, which also has branches in London, Leicester, Newark and Boston, works extensively in the heritage and culture sector. It provides a range of services, including project management, sustainable development support, building surveying and quantity surveying.

Political leaders in the Midlands and the North are demanding an early start to HS2 as new research shows the eastern leg of the...
Read more
General News

A NEW nationwide service for the food export industry has been launched by UK veterinary group, VetPartners. Exports By Vets is a dedicated veterinary...
Read more