Plans to increase the proportion of women working in the offshore wind sector and triple the number of highly-skilled jobs are set to be announced tomorrow by Energy and Clean Growth Minister Claire Perry.

Currently only 16% of the offshore wind workforce are women, but under a new deal, the sector will aim to more than double the number of women entering the industry to at least 33% by 2030, with the ambition of reaching 40%. It will also aim to increase the number of green collar jobs in the industry to 27,000 jobs by 2030, up from 7,200 today.

Already companies from Hull to the Isle of Wight are up-skilling young people, preparing them for good, high quality jobs in the sector, but the sector is pledging further action, including:

Claire Perry said: “The move to a cleaner, greener economy is outlined in our modern Industrial Strategy as one of the greatest economic opportunities of our time. Working with the offshore wind industry, I want to ensure that women and young people benefit from this sea-change.

“This deal could support a tripling of jobs over the next few decades and it is exciting to see that the industry is encouraging my children’s generation – the UK’s workforce of the future – to propel themselves into the industry, giving them the skills they need to thrive in the sector.”

Up and down the country, the clean growth job opportunities are growing, from how to manufacture a wind turbine blade to project managing the design and manufacturing stages of the development of a windfarm. The Offshore Wind Sector Deal is expected to outline how the government and the industry will increase apprenticeship opportunities with a target to be set by Offshore Wind Week in November.

The government is working with industry to encourage more students into STEM education and training, at all stages from primary school to higher education, funding programmes to increase the uptake of maths, computing and physics.  Recent research shows that almost two-thirds of 18-24 year olds would prefer a job in the green economy to one outside of it – equating to around 3.7 million young people in the UK.

Encouraging more diversity in the growing low carbon economy is all part of the government’s commitment to creating a fairer workplace under the modern Industrial Strategy. Last year the government committed to scaling up women in the nuclear industry to 40% and the offshore wind industry is also rising to the challenge. 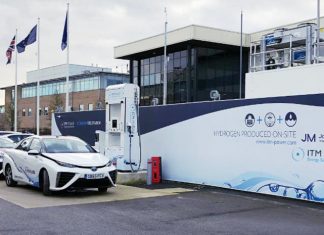 18th May 2020
ITM Power has appointed a Managing Director to lead its new wholly-owned subsidiary for the management of its refuelling assets. According to ITM Power, the...