Plans to transform the Kasbah area of Grimsby Docks, which once served the world’s biggest fishing port, into a thriving business, enterprise, and cultural quarter are being kick-started today as a grant scheme with a million-pound funding pot is officially launched.

With £500,000 from Historic England, match-funded by North East Lincolnshire Council and supported by landlords Associated British Ports, successful applicants will receive grants of up to £150,000 for 70%of the total cost of renovation, improvement or expansion works on existing or vacant premises in the Kasbah Conservation Area.

And, with North East Lincolnshire Council, their regeneration partner ENGIE, ABP and the Great Grimsby Ice Factory Trust already examining other grant-funding options, it is hoped that by 2024 it will be developing as a thriving commercial centre containing offices, workshops and studios in its unique heritage buildings. Meanwhile, with plans already in place for the dock-end of Freeman Street and demolition complete, it is hoped that the Kasbah effect will impact on the wider East Marsh area.

The buildings will all be leased by owners ABP, with tenants managing their individual projects and enjoying up to a ‘five-year’ rental holiday for any vacant buildings taken on and repaired.  The company is supporting the project as it looks at further ways to rejuvenate the area while ensuring the wider docks area remains a highly successful port operation. The fully booked Heritage Open Days event on Saturday, September 14 which includes guided Kasbah walks, are proof of the huge interest in the area, and its history.

ABP Humber Director, Simon Bird, said: “Our vision for the Port of Grimsby places the historic area of the Kasbah firmly at the centre of the Port’s future as a thriving commercial operation. The phased, sympathetic regeneration of this unique area will stimulate growth, bringing much needed jobs and economic vibrancy to help underpin the success of Grimsby for years to come.”

The designation of the Kasbah as a Conservation Area in 2017 enabled the successful awarding of this Partnership Scheme in Conservation Areas (PSiCA) grant, with Historic England and the Council being the partners.

Clive Fletcher, Historic England’s principal advisor for historic places, said: “The Kasbah’s historic buildings once served what was the busiest fishing port in the world, and together they form a hugely important collection of specialist industrial buildings – in my opinion unmatched anywhere else. The area is truly unique, and we are delighted to be working in partnership with North East Lincolnshire Council and ABP. The Kasbah’s historic buildings are not only symbols of the past but opportunities for the future. With a little imagination and investment, Grimsby’s heritage is poised to release new economic vitality and pride in the town.”

For North East Lincolnshire Council, this first transformational step is welcomed as one that provides a unique opportunity for Grimsby. North East Lincolnshire’s Regeneration lead, Cllr John Fenty said: “When you walk around the Kasbah you can sense the history and the vibrancy that once existed. Just looking at the buildings, seeing some of the facades and the signage you are almost taken back to a time when this was full of trade, people and life. A recreation of that, albeit in a very different guise for a modern era, is what this project is all about and personally I am thrilled to be a part of it.”

As the council’s regeneration partner, ENGIE is taking a lead role in managing the project. Partnership director, Marcus Asquith, said: “Partnership work has brought this project to fruition and shows the power of public and private sector organisations working together to achieve what we believe will be a wonderful outcome for this historic area of Grimsby.”

As reported, The Kasbah sits within the Greater Grimsby Heritage Action Zone (HAZ) – an ambitious programme to rejuvenate some of the town’s ‘at risk’ heritage sites, which are of national significance.  Running until 2023, HAZ is part of the overarching Town Centre Investment Plan, the Local Plan for growth and is a major part of the Town Deal. Other major projects that fall within HAZ include vacant buildings such as the Cooperage and Haven Mill and creating open space for events and activities around Grimsby Minster. Also included in the HAZ is the former West Haven Maltings building on Garth Lane where there are plans to develop a Youth Zone with the council working in partnership with national charity OnSide. 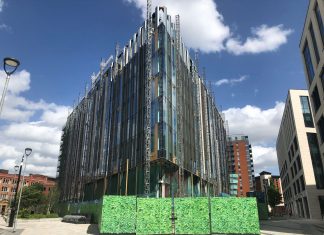 26th May 2020
Award-winning cast plasterer Ryedale Interiors Ltd has successfully won a five-figure contract to carry out work at the latest building on the Wellington Place...