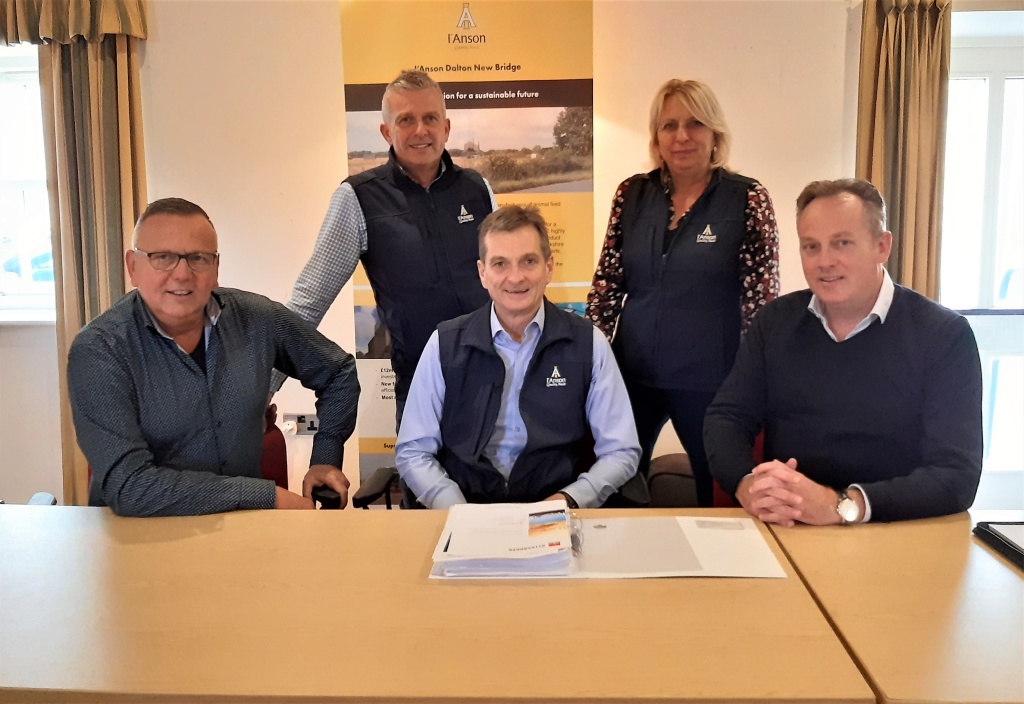 I’Anson Brothers Ltd has taken the next step in the biggest investment in its 120-year history, signing contracts enabling work to begin on the construction of the company’s new, £20 million mill at Dalton New Bridge.

The ultramodern facility has been designed to be as energy efficient as possible and will be one of the most technologically advanced feed mills in Europe. The increased production capacity will complement the firm’s existing plant at Masham and enable it to meet growing demand from existing customers, secure new orders, expand its export operations and continue to be a major supplier to the agriculture sector.

The investment will maintain the existing workforce and also create additional jobs at the new production facility, which is scheduled for completion in the summer of 2023, with more expected to follow as the company grows in the future.

In signing contracts with the business’s banking partner, HSBC UK, a relationship that began 120 years ago has been continued. The business has also appointed Ottevanger Milling Engineers, the Dutch company that specialises in the design and build of feed mills around the world, to deliver the Dalton New Bridge development.

Christopher I’Anson, the great-grandfather of the current directors, started the company when he acquired a small agricultural business and a banking agency – that eventually became the Midland, then HSBC – in the centre of Masham and opened the doors to customers for the first time on July 15, 1900. In doing so, Christopher became the first Midland Bank manager in the town.

Since then, through two world wars, several recessions, successive governments and now, two global pandemics, I’Anson Bros has remained loyal to its Masham roots, currently employing some 90 people at its manufacturing facility on the edge of the town and its distribution centre at Melmerby. It is now a business with annual revenues in excess of £45 million, supplying farming and equine customers nationally and in more than 40 countries worldwide.

With work now due to begin on the site, Chris I’Anson is to become executive chairman of the business, focusing on the development and delivery of the project at Dalton.

Chris’s sister, Sarah Richardson, will assume the role of Managing Director, working alongside brother and sales director, Will I’Anson, whose focus will remain on sales and raw material purchasing across each of I’Anson’s sites.

Chris I’Anson said: “We are delighted to have completed the deal that will enable us to start work in earnest on the new production facility. Construction of the mill complex itself will begin towards the end of the year once the essential groundworks have been completed.

“As the single biggest investment in our history, the new mill will take the business to the next level, offering great benefits to our customers, employees and the wider economy.

“It is particularly special to be working with HSBC UK on this project as it continues a remarkable relationship between the two businesses. I am sure it would give our great-grandfather a wry smile of satisfaction to see this connection has been continued as part of securing a sustainable and successful future for the business as the fifth generation of the family begin their careers here.”

Erik Ottevanger, director at Ottevanger Milling Engineers, added: “This is the result of long and intensive discussions. Now it has ultimately resulted in a 30 tph facility for compound ruminant and monogastric feeds with room for expansion in the coming years.

“This is an achievement that we are especially proud of, given that this project was agreed between the fourth generation of two family-run businesses with a long heritage in the animal feed industry. Now we look forward to realising this strategic project in the UK and helping I’Anson consolidate its position in both the domestic and export markets.”

I’Anson’s headquarters will remain in Masham, where it will continue to manufacture a range of micronized feeds, specialty rations and horse feeds. The new facility will focus on the production of bulk farm feeds.

Legal advice on the transaction was provided to I’Anson Brothers by Knights plc and to HSBC UK by Pinsent Masons.