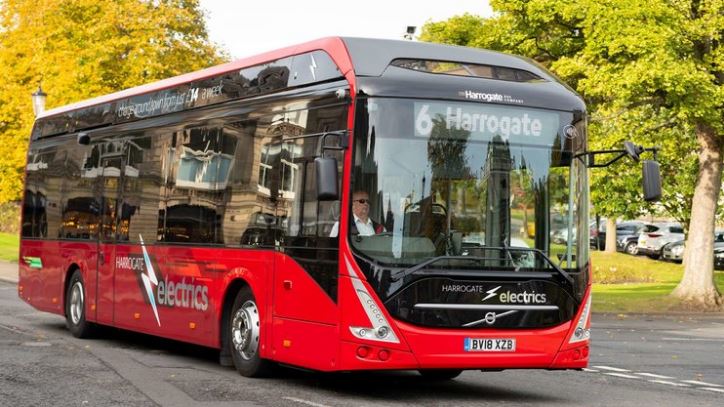 Innovative zero emission electric buses on Harrogate’s roads have been chosen to compete at the UK Bus Awards finals in London tomorrow.

They have spearheaded Harrogate’s successful bid to become Britain’s first ever Low Emission Bus Town – and now the team behind the spa town’s ground-breaking electric buses at The Harrogate Bus Company is shortlisted to compete in the UK bus industry’s biggest awards celebration of excellence and innovation.

The UK Bus Awards recognise and reward the industry’s finest talents and are hotly contested by hundreds of bus operators across the country.

The Harrogate Bus Company’s parent company Transdev is shortlisted in three of the most keenly-fought categories in this year’s Awards, with the team in Harrogate lining up to compete in the Environment category, which not only recognises the green credentials of bus services, but also improvements made to the overall environment in the communities they serve.

The company has also invested significantly in new and revitalised buses powered by low-emission Euro 6 engines – and formed partnerships with Harrogate’s businesses to offer free journeys to everyone on Sundays on three town routes served by the electric buses.

Transdev CEO Alex Hornby said: “I’m thrilled to see our great Harrogate team being chosen to compete on the national stage for these prestigious awards, which recognise the great innovation, talent and pride driving our bus industry forward throughout the UK. We’re very proud of our success in Harrogate, and grateful to every single one of our amazing people for all they do to look after the growing number of customers choosing to travel with us.

“I’m also delighted to see our talented people deservedly lined up with the nation’s finest as they continue to deliver amazing customer service in Harrogate and right across the North. We’re earning a reputation as one of the UK’s most innovative and successful transport operators, and as ever, our customers are at the heart of everything we do.”

UK Bus Awards Chairman Mark Yexley said: “Buses play a vital role in helping to improve our environment, and it’s so good to see companies that are truly dedicated to improving air quality across our towns and cities.

“It’s an honour to be able to recognise businesses who consistently show a commitment to encourage more and more people to catch the bus. We wish the team at Transdev the very best of luck in the finals.”

Two more Transdev companies are also on the shortlist for the UK Bus Awards – its ground-breaking electric buses in Harrogate for the Environment Award, and its turnaround of the once-struggling North West bus firm Rosso into a thriving business delivering double digit increases in customers choosing to travel on its new and revitalised buses, in the Making Buses A Better Choice category.

East Riding of Yorkshire Council's Cabinet has confirmed support for developing a Town Deal for Goole. Councillors have agreed to press ahead with preparation of...
Read more
General News

Arup, which has offices in Leeds, Sheffield and York, is set to cut 350 jobs. The engineering and design consultancy's redundancies come as a result...
Read more
General News

Global agency Red Diamond Executive Headhunters has announced a raft of new business wins. Operating out of its head office in Huddersfield and in the...
Read more
General News

James Pinchbeck, Marketing Partner at Streets Chartered Accountants, breaks down the Chancellor’s economic statement and what it means for businesses. The headline grabbing announcement...
Read more