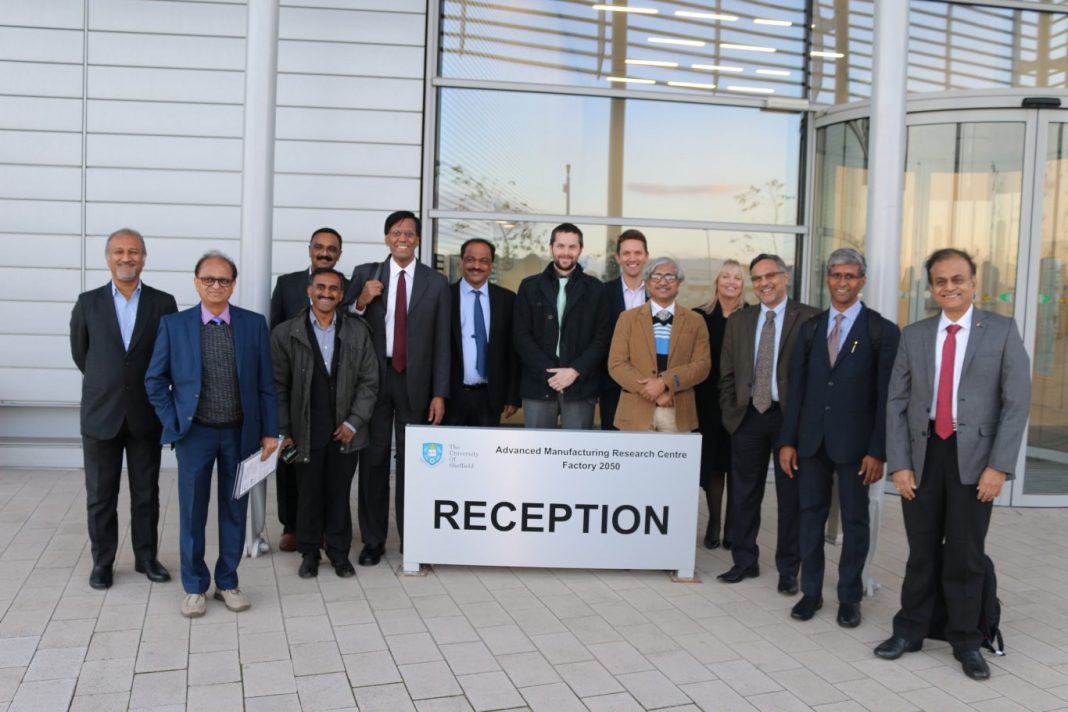 A senior delegation of Indian manufacturing and technology companies has visited the University of Sheffield’s Advanced Manufacturing Research Centre during a week-long visit to the UK.

As well as visiting Sheffield City Region, the delegation also included visits to manufacturing centres of excellence in Coventry, Birmingham and Manchester in their itinerary.

Sir Nigel Knowles, chair of the SCR Local Enterprise Partnership, said: “This was an important visit for both the Sheffield City Region and our partners at the University of Sheffield’s AMRC.

“We are looking to develop stronger partnerships with high growth markets such as India, particularly in the context of Brexit. When we leave the EU, our relationships with countries such as India, as well as China and the USA, will be increasingly important.

“Our region is leading the world in advanced manufacturing and engineering, with investments from global leaders such as McLaren and Boeing demonstrating that investor confidence is at a high. I hope the delegation were impressed by what they saw.”

AMRC Executive Dean, Keith Ridgway, said: “As the world’s largest democracy with ambitions to leapfrog to advanced manufacturing technologies and processes, India is an ideal partner for both the AMRC and the Sheffield City Region. Our commercial arm, Casting Technology International, is heavily engaged with a number of regions across this vast country.

“Last year we helped one of India’s most dynamic regions, Uttar Pradesh, develop the Asian subcontinent’s first ever titanium casting facility, backed by the Indian government’s ‘Make in India’ campaign, in response to fast-growing demand in India and around the world.

“We are now working with the Indian Institute of Technology (IIT) to accelerate the growth of an advanced manufacturing corridor in the Lucknow/Kanpur area with the country’s most advanced foundry group, PTC Industries and regional government.

“The historical and cultural links between our two countries is a great foundation for collaborative research and development work. It’s been a real pleasure for the AMRC to host the delegation on their visit to the UK, and are proud that they should want to come and see how we can better work together in the future.”

This week’s visit follows the announcement of an ambitious ‘Tech Partnership’, declared during Prime Minister Modi’s visit to the UK in April 2018, which aims to support region-to-region collaboration between the UK and India.

An important stage in UK-India tech collaboration has been reached, with advanced manufacturing and the incorporation of digital technologies such as 3D printing, robotics and automation being a key theme.

During their time at the AMRC, the delegation toured Factory of the Future and Factory 2050.

This is the latest in a series of events run in the Sheffield City Region to increase trade with India. Earlier this year an Access India Programme business breakfast was held at the Mercure Hotel in Sheffield, in a bid to encourage SMEs to learn more about trading with India. And a roundtable event also took place with the Indian High Commission and leading Indian businesses in London in December last year.

A Yorkshire-based tech firm has partnered with a workplace health specialist to launch a digital assessment programme to support staff health and wellbeing. The move...
Read more