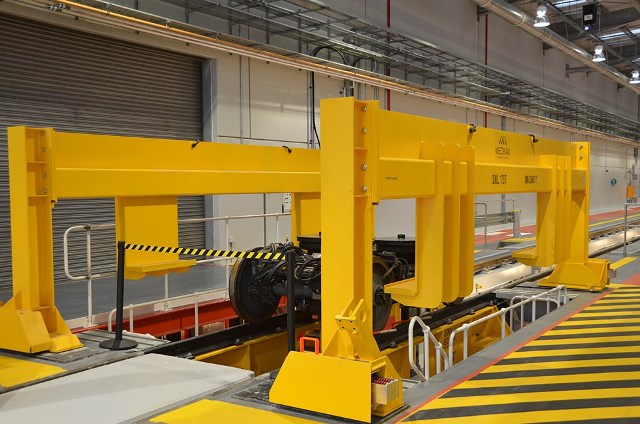 Equipment produced by Sheffield-based Mechan is helping Siemens Rail Systems UK bring to life its vision for the future of train maintenance.

Two Mechan bogie drops have been installed at the new Three Bridges depot in London, which will be used as a role model for Siemens projects worldwide.

Construction of this technically advanced facility in Crawley forms part of the Thameslink upgrades to London’s commuter routes. It was opened officially by secretary of state for transport, Patrick McLoughlin, earlier this month and will accommodate 115 electric trains, due to enter service next year.

Mechan’s bogie drops are installed within the depot floor, enabling bogies and undercar modules to be removed or exchanged without lifting or splitting carriages. Chief executive, Richard Carr, said: “To see our equipment playing such an integral role in this sophisticated maintenance environment makes us very proud. Reducing servicing times whilst increasing safety is vital for depot operators and our products deliver both of these aims reliably and successfully.”

Mechan has supplied a further two bogie drops for the Hornsey depot in Haringey as part of the Thameslink project. This smaller facility is based on the east coast mainline and is due to open in 2016.

Leeds City Council has distributed an additional £30 million to help businesses cope with the financial effects of COVID-19. The council has already distributed around...
Read more
Finance

The Regal Food Group has secured £89,391 of grant support from the Leeds City Region Enterprise Partnership (the LEP) towards the expansion of its production facility and is creating 30 new jobs. Regal Foods is a well-established food manufacturer that has...
Read more
Manufacturing

Fears over new relationship with EU cloud outlook for manufacturers

Fears over the impact of the UK’s new trading relationship with the EU and the attractiveness of the UK for both investment and talent...
Read more