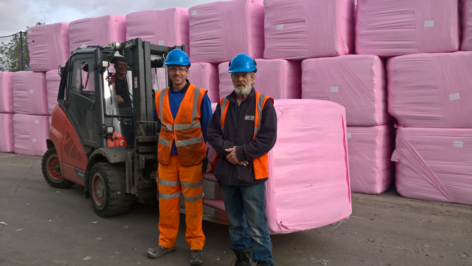 A Grantham-based recycling firm has been supporting Breast Cancer Awareness Month this month (October) by wrapping bales of SRF in pink bale wrap instead of its usual black and green.

Mid UK is taking part in the worldwide annual campaign involving thousands of organisations, to highlight the importance of breast awareness, education and research.

The campaign sees a donation by wrap manufacturers Trioplast to the charity Breast Cancer Now for every roll of pink bale wrap bought by Mid UK Recycling and other businesses taking part.

Ruth Cullen from Mid UK Recycling told Business Link: “The great thing about pink is that it’s so eye-catching in the yard and when it is transported on the roads, so it helps to raise awareness of this fantastic cause. The bales attract a lot of interest from the public. Pictures of pink bales have been all over social media.”

As well as demonstrating their support by wrapping bales in pink, Mid UK Recycling staff are participating in the “Wear it Pink” day on Friday 20th October. Staff across all the Mid UK Recycling Ltd sites will be wearing pink and making a donation to the campaign.