The scene of a medieval murder over a trade dispute 500 years ago, is being transformed into a 21st century café and community hub.

York-based Croft Farm Construction is refurbishing the Grade 1 Listed Red Tower, near Navigation Road in the city. Its original construction was part-funded by Richard III, and later completed by his successor as the only section of the city’s medieval walls built from brick rather than magnesian limestone.

Internal fitting out in a £90,000 contract has started for owner, not-for-profit Red Tower Community Interest Company, which secured a 30-year lease from City of York Council in February last year.

After refurbishment, the property, a Scheduled Ancient Monument, will incorporate meeting and events space, LED lighting, a café, kitchen and WC as a community hub for residents, visitors and businesses. Funding is from Yorventure’s Landfill Communities Fund, City of York Council and Two Ridings Community Foundation. Profits will subsidise community use.

Croft Farm Construction MD Phil Gledall, says: “While this is a small project, it was irresistible because of the exciting challenge of working on such an unusual historic building with a remarkable background. I doubt that any of us involved– and one is an apprentice joiner – will get to work on anything similar in the rest of our lives.

“It is wonderful to be part of a project breathing new life into a property which has lain empty for centuries because no one knew what to do with it until Red Tower CIC developed its vision to revitalise it as a community hub.

“The structure and listings associated with The Red Tower restrict how we can work and we are applying traditional skills and attention to detail, such as fastening into mortar joints rather than brickwork, so as not to damage the ancient fabric.”

Red Tower CIC chairman Barry Beckwith, said: ”The Red Tower has been dormant for far too long and it is our duty to provide a quality community resource. We are delighted that work has started and are confident that Croft Farm Construction will do a first-rate job.

“We want The Red Tower to be available during crises so comfort and information can be made available. Since a local men’s club closed there is no community facility and we want to give local people, including many elderly and infirm, a new meeting place. Charitable advice organisations are also keen to use The Red Tower as an outreach centre. We have already hosted Older Citizens Advocacy York (OCAY), a healing clinic and hope to create a community cinema and entertainment such as folk nights.

“Our lease includes gardens east and west of the tower with growing beds offering vegetables free to local people. We have also held free residents BBQs and plan to work with the newly-formed Walmgate Community Association which covers Walmgate  and  the Navigation Road estate badly-affected by the 2015 floods.”

Because The Red Tower was built of brick, its construction did not please local stonemasons unhappy that tilers were asked to build the property. The tilers sought protection from the city council to stop masons threatening them and breaking their tools. In 1491, a tiler, John Patrik was murdered. Two masons, York’s Master Mason, William Hindley, and an accomplice, Christopher Homer, were charged with murder but later acquitted. 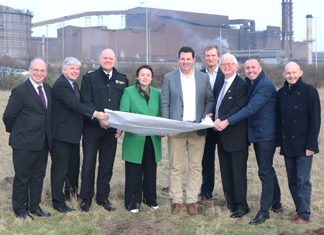 Tess Egginton - 14th February 2020
Proposals for a flood resilience campus of “global significance” have been launched in Scunthorpe. North Lincolnshire Council has contributed a significant cash boost to the...