Northern Ballet’s Chief Executive, Mark Skipper DL, has just marked his 30th anniversary at the Leeds-based company. The longest serving Chief Executive of any British ballet company, Skipper has served alongside three Artistic Directors to guide Northern Ballet to become the internationally renowned and successful company it is today.

Brighton-born Mark Skipper originally joined Northern Ballet on 16 November 1987 after previously working in the financial industry for Barclays. An interest in amateur theatre led Skipper to become involved with several local theatres including the King’s Theatre in Southsea where he first came across Northern Ballet who had a vacancy for a Deputy Stage Manager. Skipper successfully applied for the position and has since held several roles at the Company including Stage Manager, Company Manager and Head of Planning before becoming permanent Executive Director (later Chief Executive) in the summer of 1996.

Over the course of his career to date, Skipper has seen the Company stage over 70 new productions from A Simple Man by Gillian Lynne, starring Christopher Gable and Lynn Seymour; to the Company’s most recent new work David Nixon OBE’s The Little Mermaid

During his tenure as Chief Executive Northern Ballet has experienced huge growth in its financial turnover, fundraising capability and number of performances – in 2016/17 the Company achieved a record £2.03m in net Box Office income, close to £1m in sponsorship, and gave 258 performances.

The perception of the Company has also developed to where Northern Ballet is now recognised as one of the UK’s leading and most innovative companies, and is frequently in demand for international touring. The Company regularly receives awards and nominations, including winning the 2016 South Bank Sky Arts Award for Dance and being nominated for Outstanding Company at the National Dance Awards for the last three years consecutively.

Not without bumps in the road, Skipper has also guided the Company through challenging times including the loss of major corporate sponsors and a severe reduction in Arts Council Page 3 of 5 funding for 2012-2015 which threatened the output of the Company. His greatest success has been in securing a permanent home for the Company in Quarry Hill, Leeds in 2010. The purpose-built, glass-fronted building is one of the best dance facilities in the country and boasts seven studios as well as a 200-seat studio theatre.

Recognised for his contribution to the arts, Skipper was invited to become a Deputy Lieutenant of West Yorkshire in 2010 and represents the Lord Lieutenant at several engagements throughout the year. In addition, Skipper also uses his expertise to contribute to supporting and advising other cultural organisations such as balletLORENT, and is currently a Board member of Northern Opera Group. Skipper was also involved in the Fundraising Strategy Group for Leeds2023, the city’s bid to become 2023 European Capital of Culture.

Mark Skipper said: ‘It is hard to believe where 30 years have gone but I am proud and honoured to have been associated with such an amazing company that consistently pushes the boundaries of what we can achieve creatively, and as an organisation. I am fortunate to work with an amazing group of people who are all focused on the same goals to create great dance and reach as many people as possible. An organisation can only be successful if it changes and adapts to the times and the fact that we have kept the Company at the appropriate size, with a diverse business model has ensured that we can continue to create and innovate. In the coming years I am excited about our plans for a range of new productions and revivals, and particularly for the huge growth in our digital work whilst we maintain our position as the UK’s foremost company for touring narrative classical dance.’ 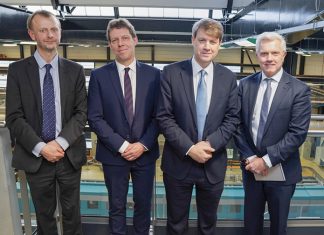