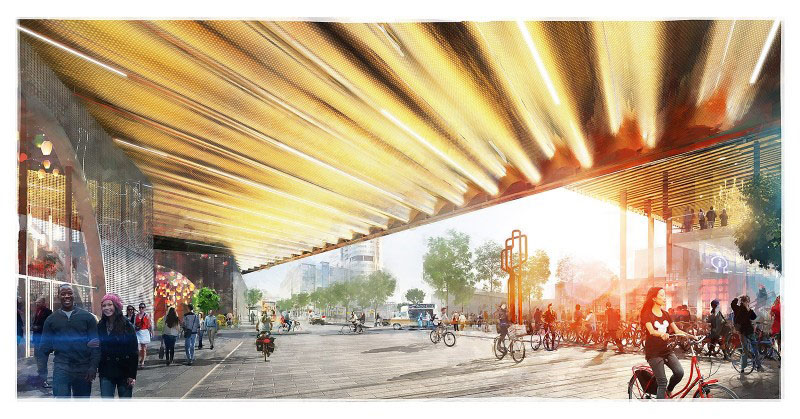 Ambitious plans for the redevelopment of Leeds Station into an integrated high-speed transport hub for the city and the Yorkshire region have been released.

The much-anticipated report by the chair of HS2 Ltd Sir David Higgins has revealed his recommended option for how to remodel the station to accommodate future high-speed rail as well as boosting through rail services in a single integrated hub.

His recommendation to government would see the station redeveloped as a ‘Yorkshire Hub’ using a ‘T-shape’ design. This would see the existing east-west rail lines being combined with connecting new north-south lines to accommodate HS2 when it comes to the city, operating as a single station serving connecting cities and towns across the Leeds City Region and beyond.

Leeds Station is the busiest rail station in the north of England, used by 27.8 million people a year which is similar to figures for King’s Cross in London. This figure is projected to rise by 114% over the next 30 years, with passenger flows at Leeds Station anticipated to match those of Gatwick Airport.

Sir David’s recommendation for the station redevelopment has been welcomed by civic and business leaders in Leeds and across the Yorkshire region.

Councillor Judith Blake, Leader of Leeds City Council said: “Leeds City Council and partners have worked together to push for a solution for Leeds Station that meets the city and region’s aspirations, creating the connectivity the region clearly needs; and I am delighted that we have such a strong proposal in place now.

“This major project will not only transform the station into a landmark gateway to welcome visitors and business travellers in the city and region, but will be transformative in terms of new jobs, skills, regeneration, and business opportunities. Redeveloping the station in Leeds alone will create 10,000 new jobs and we are determined that people in the city benefit from these opportunities.

“We have noted the acceleration in the timetable announced for the HS2 line to Crewe and we will continue to press for the building of the eastern leg to be similarly advanced to ensure the benefits of high-speed rail can be felt across the whole of the north as soon as possible. Accelerating the pace of construction and building from the north continue to be priorities for partners across the city region; as is the need for investment and ongoing improvements to make Leeds Station better for the thousands of passengers using it today.”

An insurance professional with almost 30 years’ industry experience has joined TL Dallas to spearhead the next phase of growth within its commercial division. Tim...
Read more
Appointments

The Board of Leeds-based investment non-profit, NorthInvest, has welcomed the Managing Director of FinTech at Legal & General. As a senior director at Legal &...
Read more
Commercial Property

Hull City Council has granted conditional approval for a new 48-dwelling Veterans’ Village for ex-servicemen and women in Hull and the East Riding. The project,...
Read more
Commercial Property

Completion of the Carnegie School of Sport building has moved a step closer after it was handed over to Leeds Beckett University from its...
Read more
Commercial Property

The former Marks and Spencer store and a neighbouring property in Whitefriargate have been bought by a Hull developer. Wykeland Group has acquired the 60,000...
Read more
General News

Business debt will slow the economic recovery from Coronavirus unless steps are taken to make the burden more manageable for small and mid-sized companies,...
Read more

Business debt will slow the economic recovery from Coronavirus unless steps are taken to make the burden more manageable for small and mid-sized companies,...
Read more
General News

As the UK enters Phase 2 of its lockdown, Sage’s SMB Tracker reveals there is a growing sectoral divide in the impact of the...
Read more
General News

Greencoat Capital LLP has acquired Sleaford Renewable Energy Plant in Lincolnshire from Glennmont Partners. The investment was made with funds from RPMI Railpen, the investment...
Read more
General News

Wood, the global engineering and consultancy company, is delivering the concept selection and early design for the UK’s Humber Zero project which aims to...
Read more