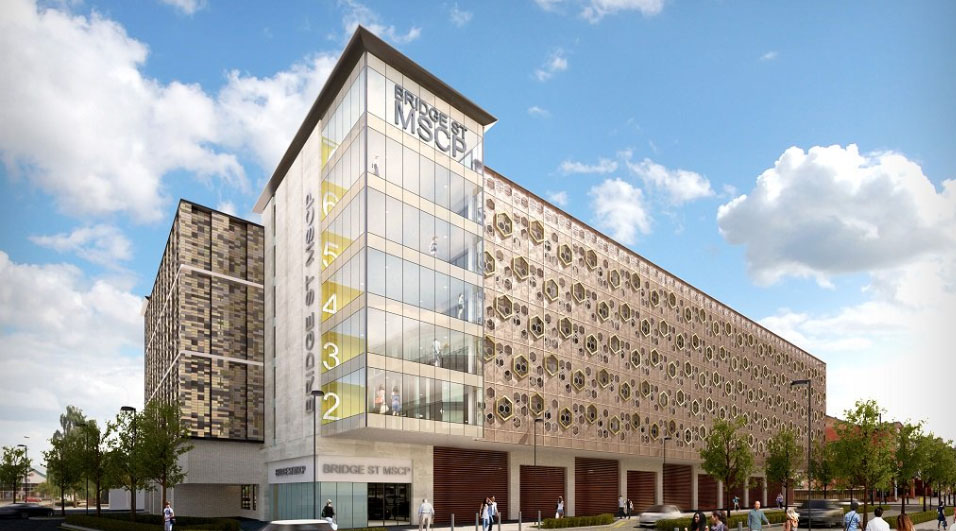 The tiles are installed on the main entrance and rear elevation of the car-park and were complemented by an inset cassette. Compared to assembling multiple panels on site, the cassette system allowed the terracotta tiles to be installed up to 50% faster. Horbury Facades is also installing a feature Bullnose aluminium capping at the roofline to all three stair cores for enhanced aesthetics and weather performance.

At Ground level, Horbury Facades is supplying and installing a granite rain screen façade system, as well as adding a full height attractive exterior of natural sand stone to the three stair cores. Stone supplied by Tiles International Ltd complements the same façade of the new town hall which is a ‘stone’s throw from the car-park.  The company also installed feature panels, again using the cassette system, to the front and rear of the building.  The whole project is being completed within 20 weeks.

Paul Rowley, Project Manager for I&H Brown Ltd, said: “This was a major redevelopment, involving the complex removal of an existing car park building and construction of a much larger eight storey structure on the same site, with an attractive new aesthetic that fitted in with the larger regeneration project.

He added: “The terracotta tiles play an important part in the look and feel of this building close to the centre of Warrington. The Horbury Facades team had the skill and expertise to be able to deliver a facade that met the project’s requirements exactly.”

Adrian Storey, General Manager at Horbury Facades, said: “This was quite a complex project involving a number of different construction techniques and a variety of materials. It is testament to the skills of our team that we were able to execute it to meet the deadline and achieve the architect’s vision for what will undoubtedly be one of the most iconic buildings in Warrington town centre.”

The Bridge Street project is being delivered by Warrington & Co on behalf of Warrington Council. It consists of a 300,000 sq ft retail and leisure regeneration scheme with a 13-screen multiplex cinema and a new 42,000 sq ft market hall, a number of family restaurants, 100,000 sq ft council offices, retail units and a public square.

The Institute of Directors has appointed Paul Stanley, CEO of Harrogate based energy business CNG, as a new Ambassador to its North Yorkshire committee. Paul...
Read more
Finance

The first phase of the £17 million Treadmills regeneration project has opened to the public in Northallerton. Supermarket group Lidl, the retail anchor for the...
Read more
Finance

Industrial chemical specialist, Airedale Chemical, has invested £200,000 to install solar panels as part of its continued commitment to reducing the its carbon footprint. The...
Read more

The first phase of the £17 million Treadmills regeneration project has opened to the public in Northallerton. Supermarket group Lidl, the retail anchor for the...
Read more