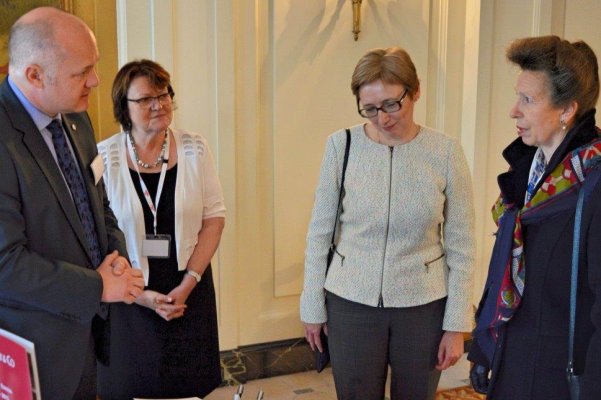 A Sheffield healthcare company displayed its manufacturing prowess in Brussels during celebrations to mark the 100th anniversary of the death of British nurse Edith Cavell.

JRI Orthopaedics , which manufactures orthopaedic implants and surgical instrumentation, was one of only a handful of UK companies asked to exhibit at the British Embassy in Brussels during the special commemorative weekend.

The multi-award winning company also received the royal seal of approval from The Princess Royal who was in Brussels to help unveil a bust of Edith Cavell, executed by the Germans during World War One for helping to smuggle Allied troops out of Belguim.

JRI Orthopaedics was founded 45 years ago by renowned orthopaedic surgeon Mr Ronald Furlong, and the Princess Royal remembered meeting him when she opened the company’s new ceramic coating plant in Sheffield back in 1998.

Managing Director Keith Jackson, pictured left, says: “Edith Cavell was a pioneering nurse who helped develop modern medicine in Belguim and we were delighted to be asked to be part of the commemoration events. It was lovely that the Princess Royal remembered her visit to JRI all those years ago and she was genuinely interested to hear how we have developed.”

JRI has recently celebrated a breakthrough deal into the Chinese market and was this month awarded the prestigious Investors in People Gold standard. The company, which employs 115 people, joins the top seven per cent of accredited organisations across the UK who has achieved this benchmark of best practice in people management.