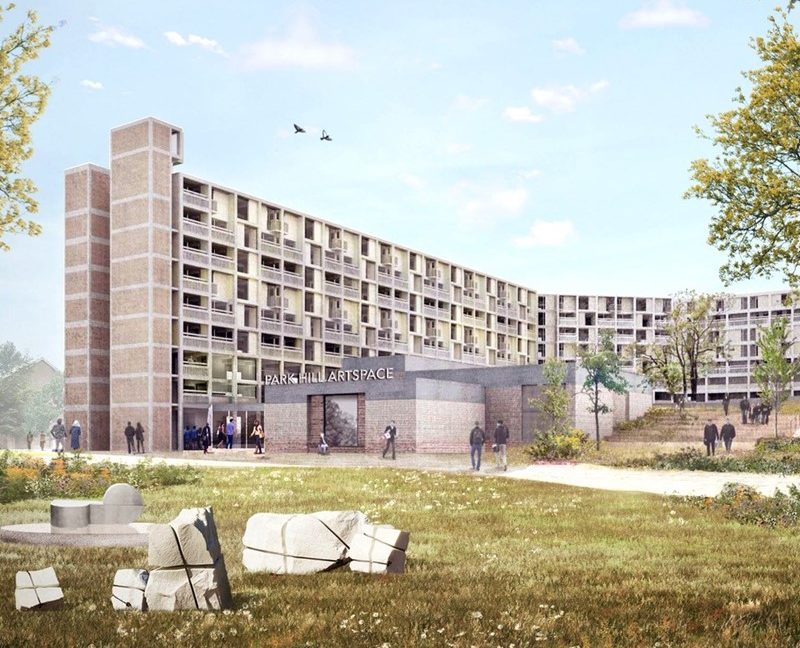 Sheffield has submitted a bid to the Government’s Levelling Up Fund for three projects that plan to transform under-used areas of the city centre, bring the city’s cultural and arts scene to the forefront and celebrate its historic heritage.

If successful, the £20m funding would be used to redevelop Castlegate and unlock potential for future investment, as well as supporting two new arts destinations: Park Hill Art Space and Harmony Works.

Castlegate would be revived as a focal point of the city by de-culverting the River Sheaf and introducing new greenery and dedicated public spaces to make the area more attractive, as well as preparing the land around the site for future uses that focus on education, employment and encouraging healthy lifestyles.

The site would be sensitively developed in accordance with its important historic past as a once thriving commercial hub and the site of Sheffield Castle, with the preservation of archaeology a priority for the project.

Alongside Castlegate, funding has also been requested for two additional projects to create new arts and music destinations in the city centre. Park Hill Art Space would be formed on the Park Hill estate, a short walk from Castlegate. One of the largest contemporary art galleries in the North, the site would also feature creative workspace and learning facilities, as well as a six-acre sculpture park connecting it to Castlegate.

Harmony Works, a collaboration between Sheffield Music Academy (SMA) and Sheffield Music Hub would move to a new location at nearby Canada House, giving the organisation a fit-for-purpose, accessible home in the centre of the city.

With a new city centre home, both organisations would be able to support the musical ambitions of children and young people from every corner of the city. It would also provide better transport access for students as SMA and The Hub currently operate from ‘borrowed’ facilities in areas of the city that has meant extended travelling time for many of the students.

Plans also include a multi-purpose space to allow students and other users to perform to the public.

Councillor Terry Fox, Leader of Sheffield City Council, said: “Castlegate is a hidden gem in the city centre with huge potential which we hope to unlock through the Levelling Up Fund.

“The area is already home to a lot of great businesses and it’s important to us that we put the groundwork in place to encourage further investment to the area, as well as linking the site up with the rest of the city centre through our award-winning Grey to Green schemes and active travel routes.

“Park Hill Art Space and Harmony Works will introduce much-needed vibrancy into the area and make Castlegate a destination in the city, not just somewhere people pass through. Sheffield has a rich, proud history and through this funding we hope to do the site justice and celebrate all it has to offer.”

Martin McKervey, Chair of the Sheffield Property Association and the Castlegate Partnership, said: “The Harmony Works project encapsulates an ambitious vision for Sheffield, the wider city region and indeed the UK offering a national centre of excellence for music education for all children whatever their background.

“Park Hill Art Space will significantly increase Sheffield’s visual arts capacity and credentials and its location is ideally placed to provide increased access and opportunities in some of Sheffield’s most underserved communities.

“Both projects will help to realise the potential of the Castlegate area and together make a huge statement about how music, culture, art and heritage can all come together to deliver vibrant place making.”

Louise Hutchinson, Artistic Director & CEO of S1 Artspace, added: “Park Hill Art Space presents a unique opportunity to establish a major new destination for arts, culture and heritage for Sheffield at one of the city’s most iconic buildings. It will create new jobs, education, and training opportunities for young people, and is projected to benefit the local economy by £39 million by 2034.

“The plans for Park Hill Art Space have been developed through extensive consultation with the local community and a pilot programme that we commenced in 2015 at Park Hill. We’ve secured £1.25 million investment to date, planning permission and if funding can be secured within the next year, an estimated completion date of 2024-25.”

Emily Pieters, Director of Harmony Works, said: “There has never been a more important time to invest in our children and the skills they develop from studying music. Through sensitive restoration of the historic Canada House, we will have a city centre home to support the musical lives of children and young people from every corner of our city. Harmony Works will be transformational, positioning Sheffield even more firmly as a city of music.”

Canada House is currently owned by the Power family who said: “We are delighted that Canada House, which has been in our family’s ownership over the last 20 years, is set to become a focus for musical arts. We wish the new owners every success in their venture to bring music to the heart of our beloved city and breathing a new life into the building – which it so deserves.”

Representatives from the Council, Parkhill Art Space, Harmony Works, and the Castlegate Partnership also recently worked together with other partners to shape Sheffield Culture Collective’s new Culture Strategy for the city.

The outcomes of the Levelling Up Fund bids are due to be released in Autumn 2021.