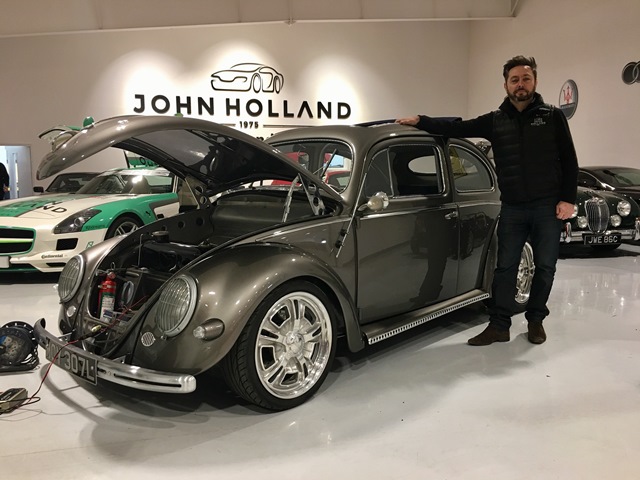 Sheffield’s leading prestige car dealership has taken delivery of a unique Volkswagen Beetle which is widely regarded as ‘the finest on the planet’.

The custom-built 1957 Volkswagen Beetle Mendeola has arrived at John Holland, based near Meadowhall, after being engineered and constructed by a host of bespoke car manufacturers in the USA.

Originally the inspiration of Tim Buckhold, a well-known Southern Californian Volkswagen buff, the vehicle was fused to a modified S2 T1-Style chassis by Mendeola Signature Motors in San Diego before being nurtured and modified by several other leading American car customisation companies.

The one-off model’s interior is inspired by Speedwell Racing/Bomber racers and dates back to the 1950s, plus Speedwell embossed seat backs, custom Speedwell gauges and clocks, a custom-designed Jaguar S-style wooden steering wheel and an integrated roll-bar.

John Holland have been instructed to sell the vehicle, which has had more than $60,000 spent on it in its lifespan, by a long-standing customer and West Yorkshire-based car collector.

Tony Entwistle, general manager at John Holland, said: “This is so much more than a Volkswagen Beetle and we’re proud as a business to have taken delivery of it.

“With its bespoke interior, custom-built body and one of the finest chassis ever made, it’s a result of some of the finest engineering and modification in the world.

“This custom-built Mendeola has had a ‘no expense spared’ detailed conversion and is what can only be described as a work of art. It’s a credit to its previous father and son owners, who dedicated themselves to restoring it and have seen it transformed into the finest model of its kind.

“It’s testament to the work and reputation of the team that we have this bespoke vehicle currently in stock – it’s the latest in a long line of rare and unique models which have been through John Holland over the years and it’s a pleasure to have it in our showroom.”