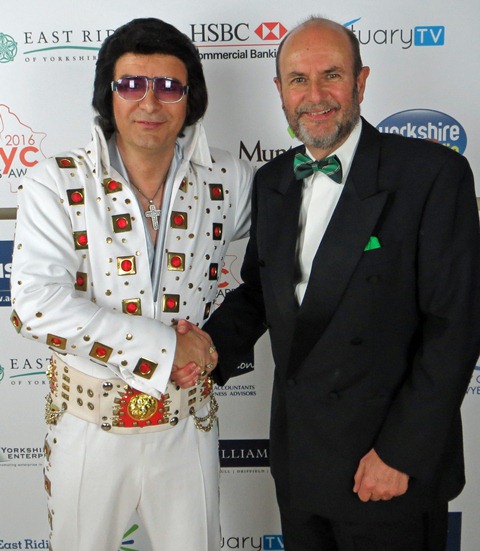 A respected East Yorkshire lawyer was “All Shook Up” at the Chamber Bridlington and Yorkshire Coast Business Awards when he was presented with a Lifetime Achievement Award – and met Elvis!

Julian Wild, a Partner at Rollits law firm, was presented with his award by Dr Ian Kelly, Chief Executive of the Hull & Humber Chamber of Commerce.

“Julian is also acknowledged as a huge patron of the arts and sport locally with his work at Hull Truck Theatre, in local and national football and horseracing”.

Receiving his award, Julian said: “This is a complete surprise, and a great honour to receive the Lifetime Achievement Award. When the Chamber invited me to Bridlington I never suspected anything like this would happen”.

Julian went on to meet Elvis, otherwise known as impersonator Steve Caprice, the award-winning tribute act based in East Yorkshire, who was backed by the Passionettes. Bridlington’s own classical soprano singer, 16-year-old Emmie Beckitt, brought the evening to a crescendo with her renditions of You’ll Never Walk Alone and Nessun Dorma and won a standing ovation from her home town audience.

The evening raised more than £5,000 on the night for Hornsea Inshore Rescue

Lincolnshire County Council has submitted an objection to plans for the Western Growth Corridor development which would see 3,200 new homes built on land...
Read more
Appointments

Two commercial property companies in the north of England, Sterling Capitol and PLP, have entered into an agreement to deliver a 100-acre development in...
Read more
General News

An ex-managing director at Golley Slater has launched his own B2B sales growth agency. Seeing the pressure the current climate is putting on businesses to...
Read more

Two commercial property companies in the north of England, Sterling Capitol and PLP, have entered into an agreement to deliver a 100-acre development in...
Read more