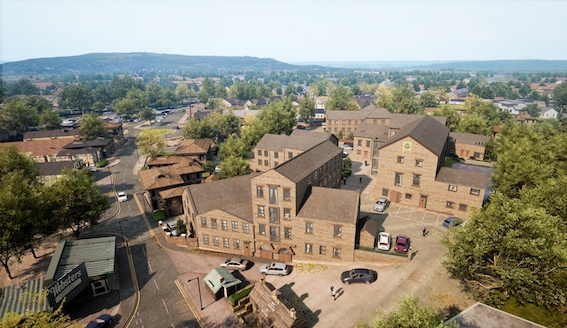 Baildon Mills is being transformed into 52 apartments and houses by Leeds based development company KMRE Group. Hollycroft Construction has been appointed as the principal building contractor.

Once complete, Baildon Mills will offer an array of one, two and three bedroom, apartments including a selection of duplexes and penthouses across four distinct buildings. In addition, a selection of three and four bedroom houses are being built within the grounds of the former cotton combing and wool spinning facility. The first homes will be ready to move into later this year.

Mark Kane, who heads up Dacre, Son & Hartley’s Baildon office, said: “There are very few new homes currently being built in Baildon and certainly nothing that offers this level of heritage and character, with such a high specification, so we’re anticipating strong demand from potential buyers and have already had plenty of enquiries.

“The development also sits in a highly sought-after area, close to rail and bus links and just a two-minute walk from Baildon village’s shops, restaurants and bars, with the stunning countryside of Baildon Moor in the other direction, which further enhances its appeal.”

Nick Gould, from KMRE Group, said: “Baildon Mills offers a selection of fantastic buildings that are steeped in history and full of industrial personality, which makes it a superb development opportunity. Every home in the development will be unique and has been designed to maximise the mill’s original character features, including high ceilings and large windows that offer far-reaching views across the surrounding moorland.

“This will be combined with a contemporary finish and exceptional specification that will include smart technology, high quality open plan kitchens with integrated appliances and energy efficient LED lighting. There’s no doubt it’s going to be a very special place to call home.”