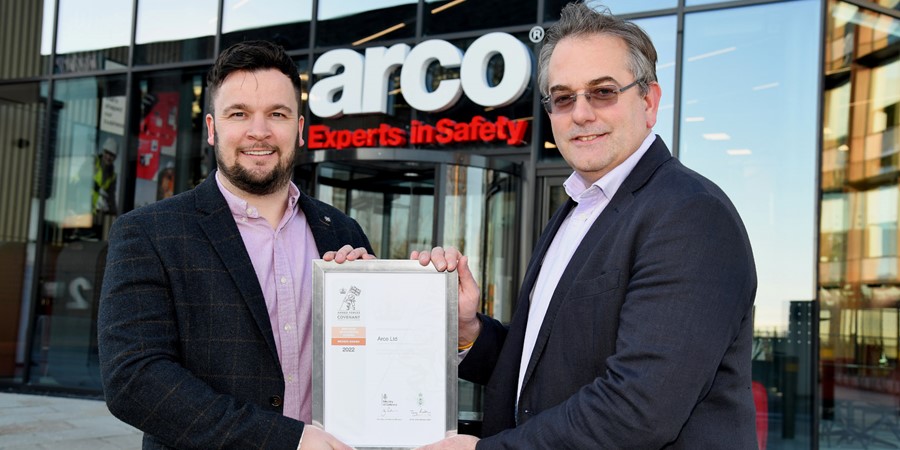 Safety equipment supplier Arco has signed up to the Defence Employer Recognition Scheme and secured a bronze award – the first step in the fifth-generation family business’ ambition of becoming a gold award employer.

The bronze awards given because Arco formally pledged its support for the armed forces by becoming a signatory of the Armed Forces Covenant and agreeing to support existing or prospective employees who are members of the community.

Joining the ERS demonstrates Arco’s commitment to being armed forces-friendly and being open to employing reservists, armed forces veterans (including the wounded, injured and sick), cadet instructors and military spouses/partners.

Penny Meddes, Chief People Officer at Arco, said: “As a family-run business with a core purpose of keeping people safe at work, Arco is delighted to strengthen its relationship with the armed forces community and promote the business as a great place to work to those who have served or are serving our country.

“This award is just the start of our relationship with the ERS and forms part of a wider strategy to promote the variety of career opportunities available at Arco to as wide a pool of talent as possible.”

Ex-serviceman Stephen Miller, now Chief Information Officer at Arco, said: “As experts in safety, we recognise and honour the role played by all who have and are serving in the military and who risk their lives to keep us safe and we are proud to work closely with several organisations within the defence sector. The Armed Forces Covenant is our commitment to them and our ERS accreditation is a real and practical way for us to provide opportunities for ex-service personnel from all branches as they transition to civilian life which recognises the many skills and talents they have to offer.”

The ERS encompasses bronze, silver and gold awards for employer organisations that pledge, demonstrate or advocate support to defence and the armed forces community, and align their values with the Armed Forces Covenant.

The ERS is designed primarily to recognise private sector support although public sector organisations, such as the emergency services, local authorities, NHS trusts and executive agencies are also eligible to be recognised.