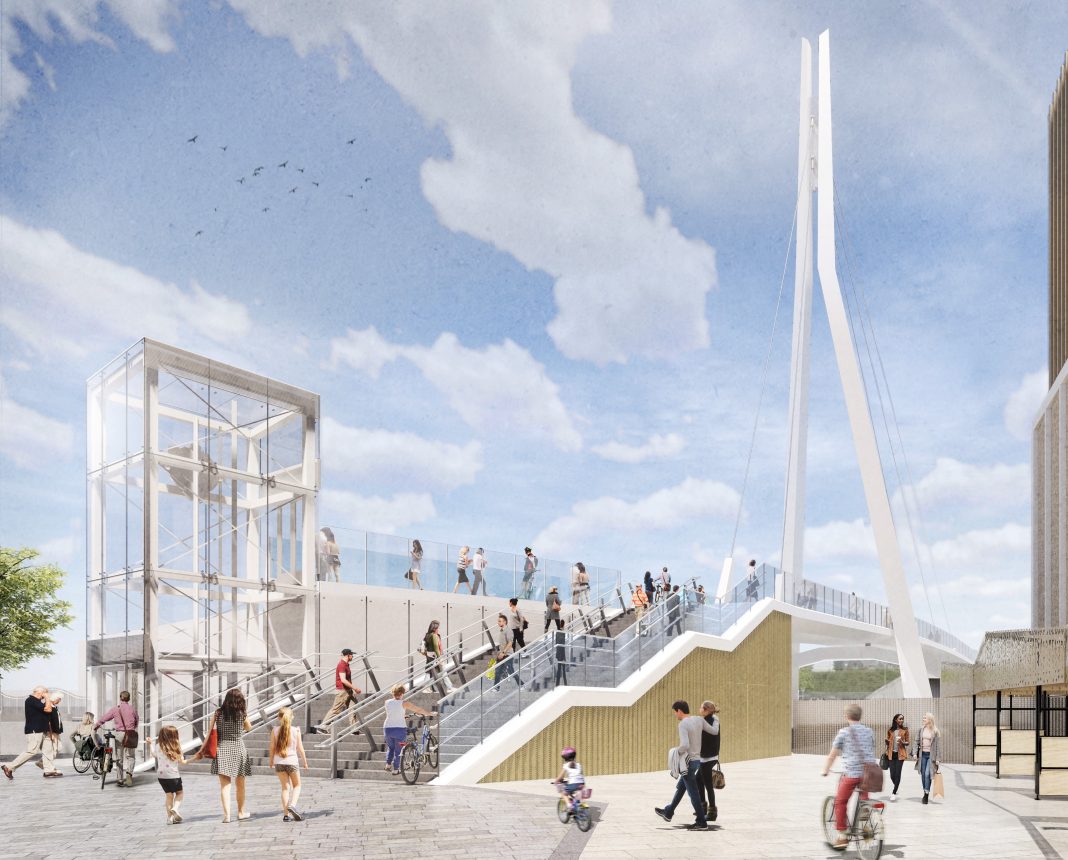 Construction work on a new landmark bridge for Barnsley Town Centre will begin in February after a contract was finally signed following months of extensive negotiation.

The new bridge over the railway line will be a permanent replacement of the former Jumble Lane level crossing, which was closed to improve safety in the area. The bridge will be a landmark feature on Barnsley’s skyline.

It will be fully accessible with lifts at both ends. It will also be cyclist-friendly, with cyclists able to take their bikes into the lifts, or walk them up the steps using the dedicated cyclist groove built into the bridge.

The contract to construct the bridge has been awarded to Keltbray. Work to build the bridge off-site will begin in February, with initial preparation work already underway. Works are due to begin on-site in July and the bridge is due to be completed by late summer 2023.

The new bridge will be fully open on Barnsley FC home match days. This will bring an end to the ongoing temporary road and footway closures which are currently required to keep everyone safe.

The current estimated cost of the project is £9.7m, which includes professional fees and sewer diversion work as well as some other enhancements over the original proposals. These include further public realm and highway improvements at both ends of the bridge.

The project has attracted external investment of almost £7m. Network Rail is contributing £2m with South Yorkshire Mayoral Combined Authority contributing a further £4.8m via their Get Britain Building and Transforming Cities funds. The rest will be funded by Barnsley Council as part of the wider Town Centre regeneration.

NMCN had previously been identified as the preferred contractor but fell into administration within days of the contract being signed.

Specialist engineering and construction company Keltbray agreed an arrangement with administrators, Grant Thornton UK LLP, to acquire infrastructure contracts and associated assets from NMCN. The Council and Keltbray have been working on the process of transferring this contract to Keltbray since October and this has now been completed.

Cllr Tim Cheetham, Cabinet Spokesperson for Regeneration and Culture, said: “The process of appointing an alternative bridge contractor for the Market Gate Bridge has been quite complex. Our procurement and project teams have been working extremely hard on this for the past few months following the administration of the former bridge contractor NMCN.

“I’m delighted that we’re able to update everyone with this excellent news that we’re now able to press ahead and complete this important part of our town centre regeneration.

“The bridge will be an iconic addition to our fantastic new town centre and the first thing people will see when arriving by bus or train. It will bring people from the transport interchange directly into our new Glass Works Square and it will be an impressive addition to the skyline.”

Mayor of the South Yorkshire Combined Mayoral Authority and Barnsley Central MP, Dan Jarvis, said: “It is very welcome to see that work is getting underway on Barnsley’s new Market Gate pedestrian bridge. This regeneration project will not only support the wider transformation of the town centre; it will also unlock significant investment opportunities for Barnsley, on adjacent development sites.

“Once complete, the Market Gate Bridge project will massively improve the town centre’s public realm, create beautiful green spaces, and enable people to swap the car for walking and cycling.

“Above all, it will mean a permanent link from the town centre to Oakwell on matchdays – which I know will be heartily welcomed by fans and Barnsley FC.”

Sophy Lane, Associate Sponsor for Network Rail, said: “This is a key project which will make it easier for people to access Barnsley railway and bus station, particularly for those with additional access needs, as well as people with luggage, pushchairs and bicycles.

“The installation of a permanent, accessible bridge will better connect the town and we look forward to residents and visitors benefitting from this scheme when it completes in 2023.”

Darren James, Chief Executive of Keltbray, said: “We’re thrilled to be working with Barnsley Council on such a prestigious project which will be a beacon of what Barnsley has to offer. The Market Gate bridge is a piece of iconic design and engineering which will look absolutely fantastic in the setting of Barnsley Town Centre.

“We have delivered a lot of major projects in the past, and are pleased to be working with partners like Barnsley in the north of England to expand our footprint. In Barnsley Council we have found a kindred spirit – a local authority which is not scared to take bold decisions and to innovate.

“We’re so impressed with the quality of the Glass Works development and the wider regeneration works in the town centre. We’re excited to be adding such a prominent and important finishing touch.”