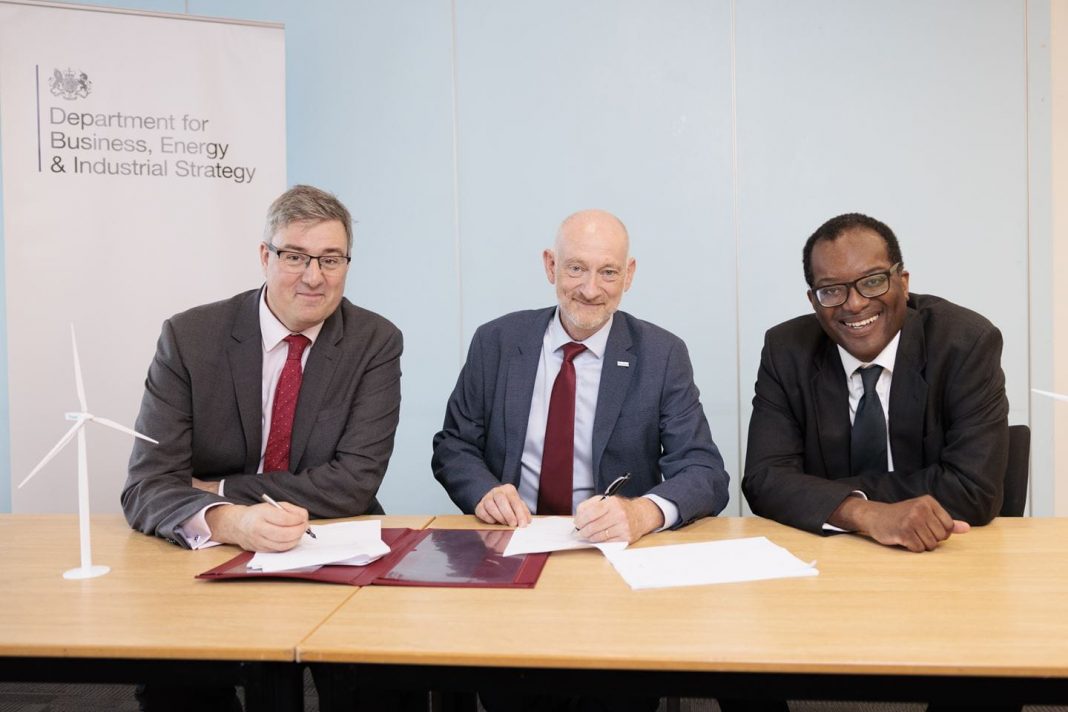 Secretary of State for Business, Energy and Industrial Strategy, Kwasi Kwarteng, joined Ørsted and the Low Carbon Contracts Company for the signing of the Contract for Difference for Hornsea 3 offshore wind farm.

Managed by the LCCC, the latest portfolio of contracts marks a substantial step beyond previous auction rounds – with Hornsea 3 awarded a CfD at an inflation-indexed strike price of just GBP 37.35 per MWh in 2012 prices.

At the signing, Ørsted’s Benj Sykes and Patrick Harnett were joined by Kwasi Kwarteng and the LCCC’s George Pitt.

With a capacity of 2,852 MW, Hornsea 3 will produce enough low-cost, clean, renewable electricity to power 3.2 million UK homes, making a significant contribution to the UK Government’s ambition of having 50 GW offshore wind in operation by 2030 as part of the British Energy Security Strategy.

Supporting up to 5,000 jobs during its construction phase, Hornsea 3 will also play a key role in in the ongoing development of a larger and sustainably competitive UK supply chain. Ørsted recently joined Secretary of State Kwasi Kwarteng at the ground-breaking of SeAH Wind’s monopile factory in Teesside, following a multi-million pound agreement for Hornsea 3 to be the first and lead customer at SeAH’s new UK facility.

Benj Sykes, Vice President at Ørsted, said: “The offshore wind industry success story continues to deliver great value to the UK economy and Hornsea 3 represents another significant step forward. The project demonstrates how far the industry has come in terms of cost and scale and, crucially, in bringing forward projects that will deliver low cost, clean energy to households and businesses across the country.

“Ørsted expects to invest a further £14billion in the UK by the end of this decade, supporting the delivery of thousands of high-quality jobs and strengthening the UK supply chain. We look forward to working with government and industry colleagues to accelerate the deployment of offshore wind.”

Hornsea 3 will be located 160 km from the Yorkshire coast, and Ørsted expects to commission the wind farm in 2027. When Hornsea 3 comes online, Ørsted’s Hornsea zone – comprising Hornsea 1, 2 and 3 – will have a total capacity of in excess of 5 GW, making it the world’s largest offshore wind zone covering the power consumption of approx. 5 million UK homes.

The Hornsea Zone will also include Ørsted’s Hornsea 4 project, which could have a capacity of approx. 2.6 GW. Hornsea 4 is currently going through the planning process with a decision expected early next year.

Mablethorpe set to be a leader in medical innovation