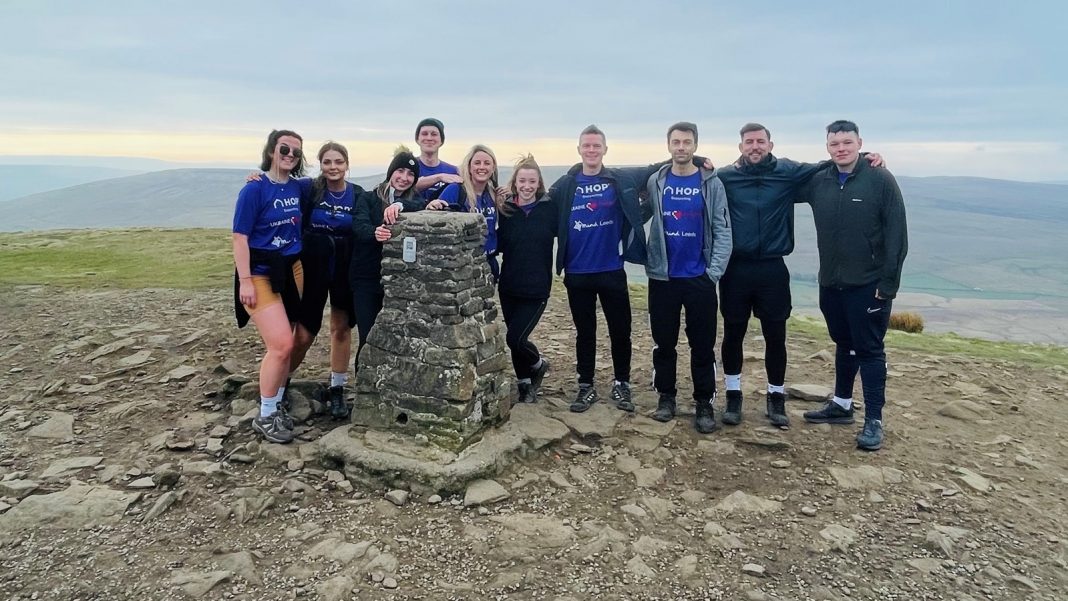 Team members from Leeds estate agent HOP have raised thousands of pounds for charity, after conquering The Yorkshire Three Peaks.

The company then followed this up with a more sedate initiative and partnered with local schools in Horsforth to produce hundreds of commemorative Jubilee themed tea towels.

Members of HOP’s team from the company’s Horsforth, Leeds city centre and Pudsey offices completed the gruelling hike in under 12 hours and raised £3,698 for Ukraine Charity and Leeds Mind.

The challenge involves walking almost 25-miles and an ascent of 5,300 feet to the top of the three highest peaks in Yorkshire, comprising of Pen-y-ghent, Ingleborough and Whernside.

Luke Gidney, Managing Director at HOP, said: “The Three Peaks was a very tough challenge. We started at 7.15am and all finished by 7pm, within the 12-hour timeframe we were aiming for, which was a huge achievement.

“Despite the blisters, sore feet and aching legs, we all managed to maintain the team spirit and positive vibes that we rely on in our working lives, as well as the sheer determination of knowing that we were raising an impressive amount of money for two incredible charities in Ukraine Charity and Leeds Mind.”

As part of a second community focussed initiative, HOP invited pupils from Horsforth primary schools, including St Margaret’s, Featherbank and Broadgate, to produce a selection of Jubilee themed artwork. The designs are now also being displayed on large banners outside each school for all the children and parents to enjoy.

In addition, the standout drawings have been printed onto hundreds of tea towels that are set to become a feature in homes throughout Leeds and beyond, to mark the Queen’s Platinum Jubilee.

Luke added: “We’ve also thoroughly enjoyed working with school pupils in Horsforth to design our special tea towels. We received hundreds of drawings from each school and all those who took part made a huge effort, the pictures are brilliant and we are delighted to include them on the tea towels. We’re giving these to all the pupils that took part and we’re sure they will take pride of place in the kitchen and make a fabulous souvenir to mark this special occasion.”

These latest charitable activities follow HOP committing to planting over 450 trees this year, after joining forces with GreenTheUK, which connects businesses with local wildlife projects and works in partnership with the Royal Forestry Society (RFS) planting thousands of climate resilient trees across the UK.