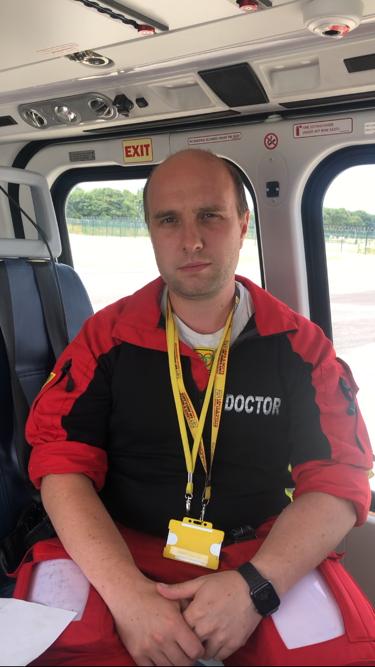 A Lincs & Notts Air Ambulance (LNAA) doctor who is blazing a trail for young surgeons through his work at the charity, has been shortlisted in the Air Ambulances UK (AAUK) Awards of Excellence.

Dr Mike Hughes is different to other air ambulance doctors in that he comes from a surgical background, something that isn’t often seen in the helicopter emergency medical service (HEMS) – a world which is largely populated with doctors from anaesthesia and emergency medicine.

But it’s his set of skills that has brought a different perspective to the work of the crews on board the helicopter.

LNAA’s Deputy Medical Director, Doctor Adam Chesters said: Almost immediately after being signed off in the service, Mike attended a series of difficult cases, treating some of the sickest patients attended by the service in this time. Using his surgical expertise, he was able to help deliver the very highest quality of care to the patient.”

Mike joined LNAA in February 2022 and has been called out to 176 incidents in that time. He has dealt with some of the most challenging shifts over the summer and being a surgeon rather than an anaesthetist has meant he has carried out some medical interventions using a skill set that the other doctors do not have. Incidents include 36 road traffic incidents, 23 cardiac arrests and 19 incidents of self-harm.

When he attended a patient who had been stabbed in the neck, rather than apply direct pressure to the bleeding wound, Mike has the skills to be able to dissect down and tie off the bleeding vessels using forceps before transferring the patient to the nearest Major Trauma Centre with the forceps in situ. This technique is a better way of stopping the bleeding and it’s not in the skillset of any other doctors at LNAA and in very few across the air ambulance community.

Mike also recently passed the Fellowship of the College of Royal Surgeons examination in Major Trauma Surgery – he is the first person to ever sit the exam and so the first to pass it! An amazing achievement after his first busy six months at LNAA and the recent birth of his third child.

The annual awards celebrate and recognise the specialist lifesaving skills and commitment of those working tirelessly within and in support of the air ambulance community across the UK.

The awards ceremony will be held at Edgbaston Stadium, Birmingham on 14 November where crew members will be willing Mike to scoop the Doctor of the Year award.