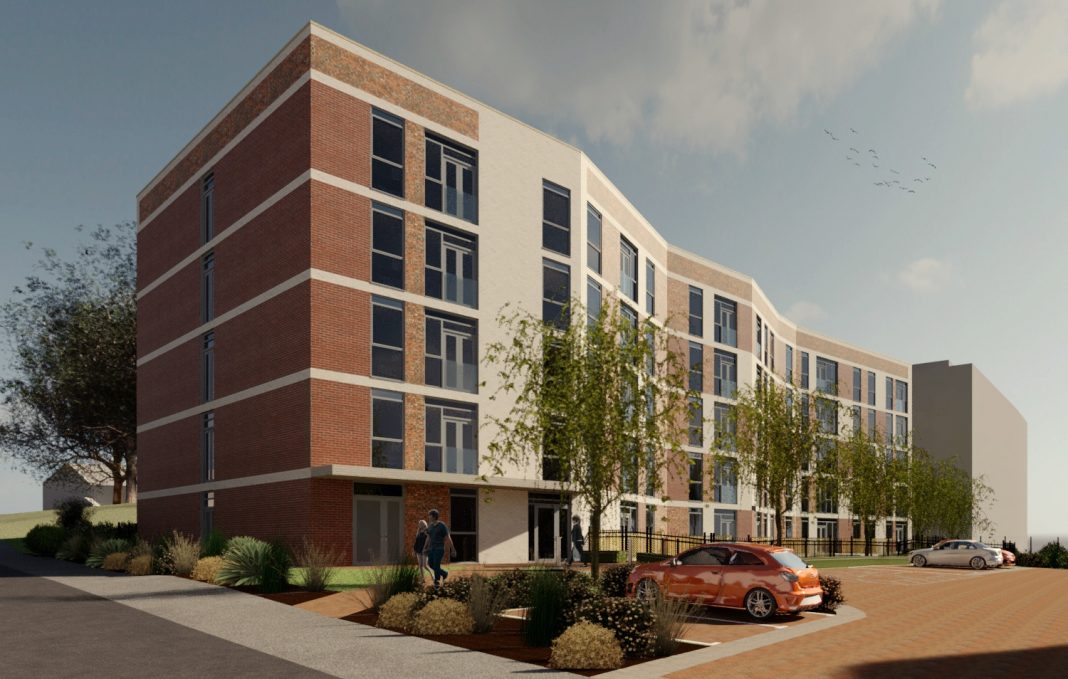 Plans have been submitted to build 58 one-, two- and three-bedroom sustainable apartments for social rent, close to Leeds city centre, on Railway Street at Saxton Gardens.

If plans are approved, a new five-storey, energy efficient scheme will be built on the site of the former ‘Yorkshire Rider Social Club’, close to Quarry House and within easy access of the city centre. The area is set to undergo further significant regeneration over the coming years.

The homes will be energy efficient and will feature heat pumps instead of traditional gas central heating, as well as benefitting from low-carbon energy source EV charging points and cycle storage to facilitate green, active travel.

The scheme will include 28 one-bedroom, 25 two-bedroom and five three-bedroom apartments. The ground floor apartments will each have their own garden and additional communal outside space is included, which will be landscaped with trees to enhance biodiversity. All the homes have a flexible layout and will include workspace areas, with the larger apartments each having an office, reflecting the increase in home working.

Subject to planning approval, Leeds City Council will sell the site to LYHA, and support its development with commuted sums contributions. These financial contributions have been secured from other new residential developments, where it has not been possible to provide sufficient affordable housing on-site. The Council manages these pooled funds to invest in other sites, ensuring that more, new affordable housing is being built across the city.

Joanna Chambers, Director of Assets and Growth at LYHA, said: “We are delighted that our bid for the site was successful and are excited to begin turning our plans into reality. There is a significant need for more affordable housing in Leeds, particularly in the Burmantofts area and in neighbourhoods near the city centre.

“Brewster Bye has designed an enticing and highly functional vision for the new homes. Subject to planning, we could start on site in Spring 2022 and estimate that the build will take 18 months to complete. All nominations for initial tenancies will be made through Leeds City Council.”

Cllr Helen Hayden, Leeds City Council’s executive board member for Infrastructure and Climate, said: “We are pleased to be able to work with LYHA on this development, which will provide much-needed affordable housing in this part of the city, and at the same time bring unused and undeveloped land back into use.

“By delivering a mix of different homes, this development reflects our efforts to address housing need in the local area and to ensure we have mixed communities, where diverse housing needs can be met.

Mark Henderson, from Brewster Bye Architects, said: “Our plans have been developed in close consultation with Leeds City Council’s planning officers. It’s a very interesting site and we have worked with LYHA to create a landmark development that will form an important part of this evolving area.

“The scheme will take its place amongst some of the most high-profile and forthcoming developments in the city. In slight contrast to the sleek modernist architecture of the surrounding proposals, our scheme has a lively, undulating form set within rich landscaping, which both softens and gives a human scale to the development.

“Visually interesting and attractive, the apartments will have an open plan living kitchen area, separate utility and storage space, homeworking space, bedrooms, bathrooms and floor to ceiling windows that flood them with natural light. Crucially, all the homes will also be highly accessible and adaptable for residents with limited mobility.”

Outside the development, there are a number of green spaces surrounding the site, that are a legacy of mid-20th Century development of the area. These will be linked together and enhanced, with LYHA replacing low-grade amenity grassland with enhanced planting and shrubbery, establishing habitat areas throughout the development.