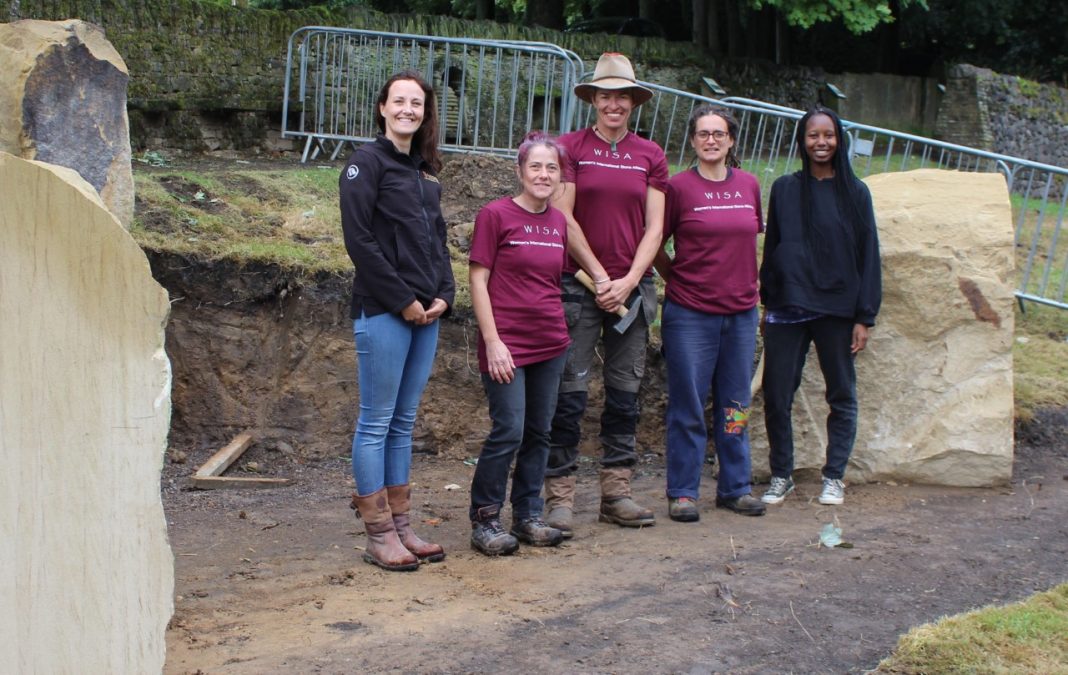 A West Yorkshire-based natural stone supplier is supporting a group of female traditional stone specialists who are building a new monument at Shibden Hall, Halifax to celebrate the life of Anne Lister, the diarist, industrialist and landowner whose controversial life inspired the global hit BBC-HBO TV series, Gentleman Jack.

Traditional Stone is working with the team of six members of the Women’s International Stone Alliance (WISA), led by Anglo-Australian Emma Knowles, who was born and grew up in East Yorkshire. Formed of traditional stone specialists from Italy, Ireland, the UK and USA, the team’s month-long programme will see the creation of three monoliths connected by dry stone walls, complete with carvings.

The monument is designed by Master Craftsman and accomplished designer, David Griffiths, to reflect the strength of Anne Lister and her love of landscapes and the mining industry, with the carvings revealing more about Anne as a person, including an extract from her diaries, both in her original code and a translated version.

It will serve as a fitting tribute to Anne Lister, whose life rose to prominence in 2019 when the TV series Gentleman Jack told the story of how she shook off female stereotypes to live a successful life that challenged 19th century English norms. The female wallers, masons and carvers working on the Shibden Hall monument work in a heavily male-dominated sector which they are aiming to change by encouraging more girls and women to get involved in the traditional trades.

Project leader Emma Knowles said: “There are so few women working in the stone industry and this is why we want to do everything we can to encourage more to get involved and support them through our network.

“We are thrilled to have been invited to create the new monument at Shibden Hall to celebrate Anne Lister, who wasn’t afraid to challenge convention and show that women can excel in male-dominated professions. And a big thank you to David Griffiths, Calderdale Council, Simon Lumb and Traditional Stone – without their support we would never have been able to build this unique monument.”

The supplier of the feature stones for the Shibden Hall monument, Traditional Stone, is itself unusual in being one of the few companies of its kind to employ women in skilled roles. Its workforce is around 15% female, including its general manager, IT manager and a stone mason.

Emma Hudson, general manager at Traditional Stone, added: “This is a tremendous project to be involved with, and we are delighted to donate the raw materials that WISA team need to create this unique monument. It is so important to encourage women and girls to get into the natural stone trades and hopefully more will be inspired to explore a career path and seek training in our sector when they see the skill and creativity on show at Shibden Hall.”

Calderdale Council’s cabinet member for public services and communities, Cllr Jenny Lynn, said: “We’re delighted to be able to accommodate this work at Shibden and support this great initiative. The resulting work will create a lasting legacy of this female-led project and provide a fitting tribute to Anne Lister. The monument will also be a further attraction at the beautiful Shibden Hall and Park and will be enjoyed by visitors for many years to come.”

Emma and the stone specialists will complete most of the monument and wall construction in the period towards the end of August and first week of September, with an official unveiling set to take place around 10th September.